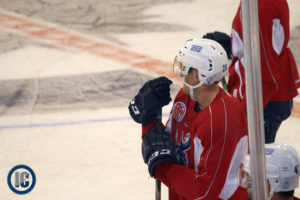 With 16 forwards and nine defencemen in camp yesterday expectations were something had to give with the Moose and today they made four moves to get their rosters down to a more manageable number.  Here is the Moose Release:

Hill, 27, suited up for six games with the Moose over his professional tryout. The Sarnia, ON native has played 211 AHL games in his career, totaling 33 points (8G, 25A) and 197 penalty minutes.