Moose players and staff went to a local family’s backyard rink for a skate.

The Azaransky family had submitted their backyard rink as part of a contest the Moose hold each season.  After consideration by the Manitoba Moose staff of a number of excellent rinks they were declared the winners of the contest.

Had this event be held today instead of yesterday we would have seen a fifteen degree change in temperature as the Moose took to the backyard rink of the Azaransky family in West St. Paul on Tuesday night with the thermometer showing about -15 on the scale (not including wind chill).  Offsetting the cold there were fire pits placed strategically around the rink.

Things kicked off when the California kid, Chase De Leo, who has embraced the cold since he first arrived in Winnipeg, spoke with us about how special it is to get this opportunity “It’s awesome.  It’s so fun seeing all the kids out here and all the parents.  Obviously, it’s a pretty unreal set up so they did a really good job and I know I’m excited and all the boys are excited to be out here.”  While he acknowledged that the ice would have melted if this was taking place back home in California he also recognizes what hockey means in Manitoba “This is special.  Obviously this is a special place to be able to live and play hockey.  You can see how tight knit the community is and hockey orientated the community is and it’s fun to be a part of it and definitely happy to be out here.” 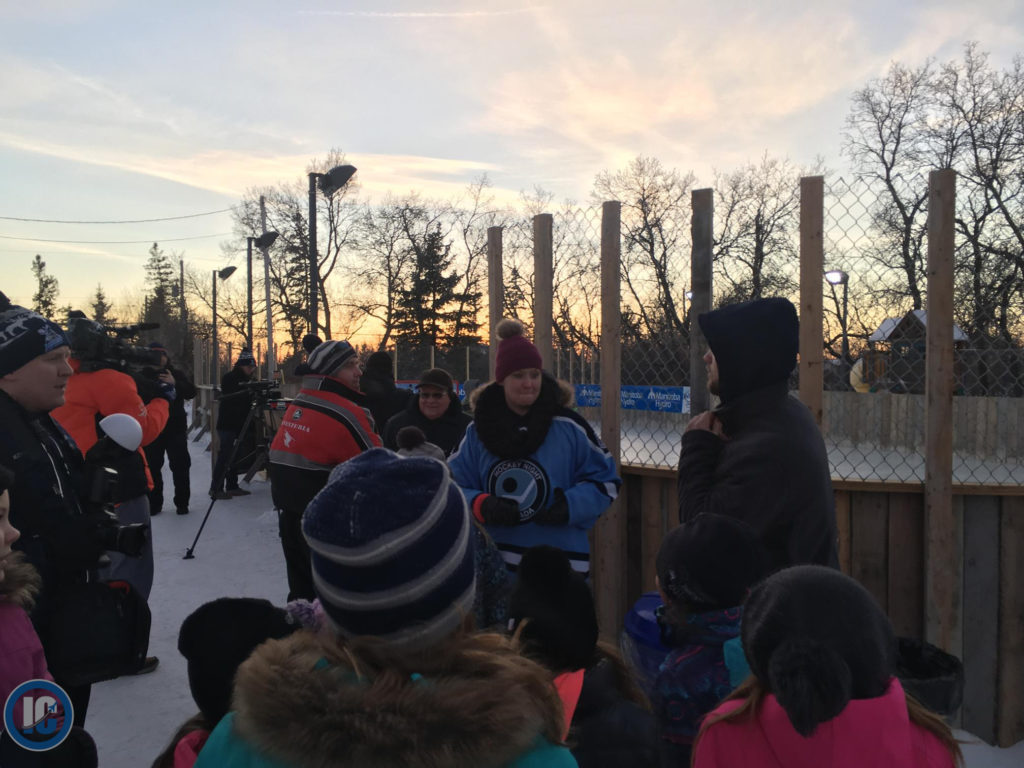 Luckily for the players the Azaranskys have a giant heated garage where the players, friends and thankfully even the media could warm up in prior to the event getting under way.  The players pose here with Ken Azaransky. 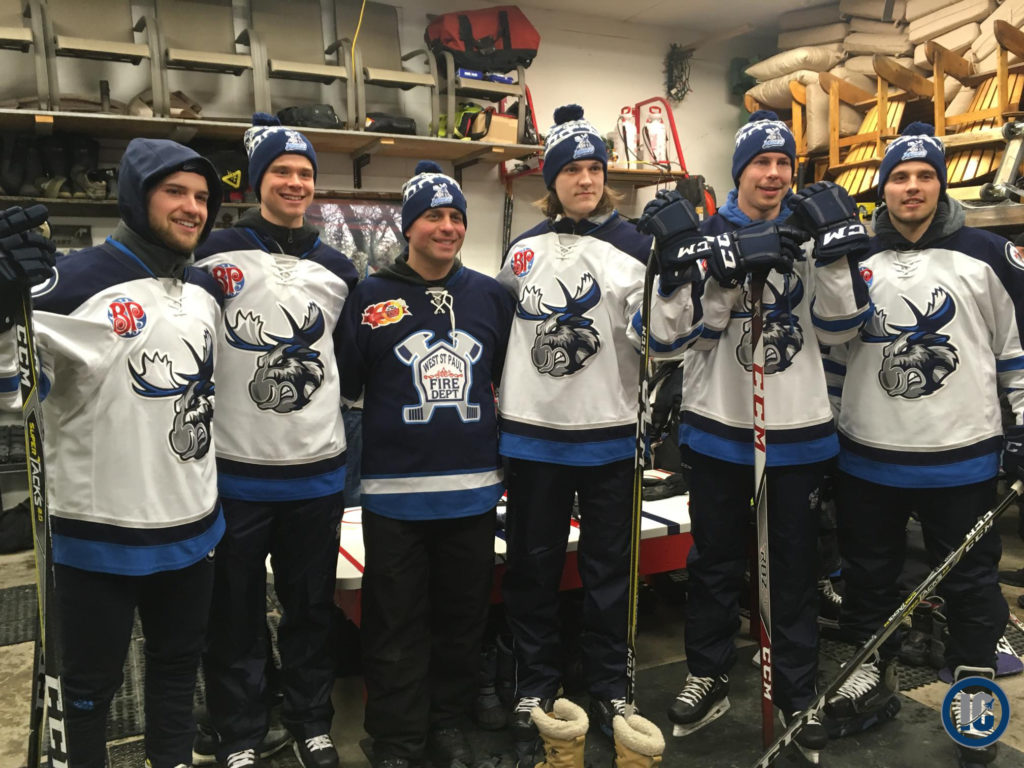 The players, including the aforementioned Chase De Leo as well as Eric Comrie, Sami Niku, Darren Kramer and Michael Spacek took to the ice and posed for another photo in front of the gathered members of the community. 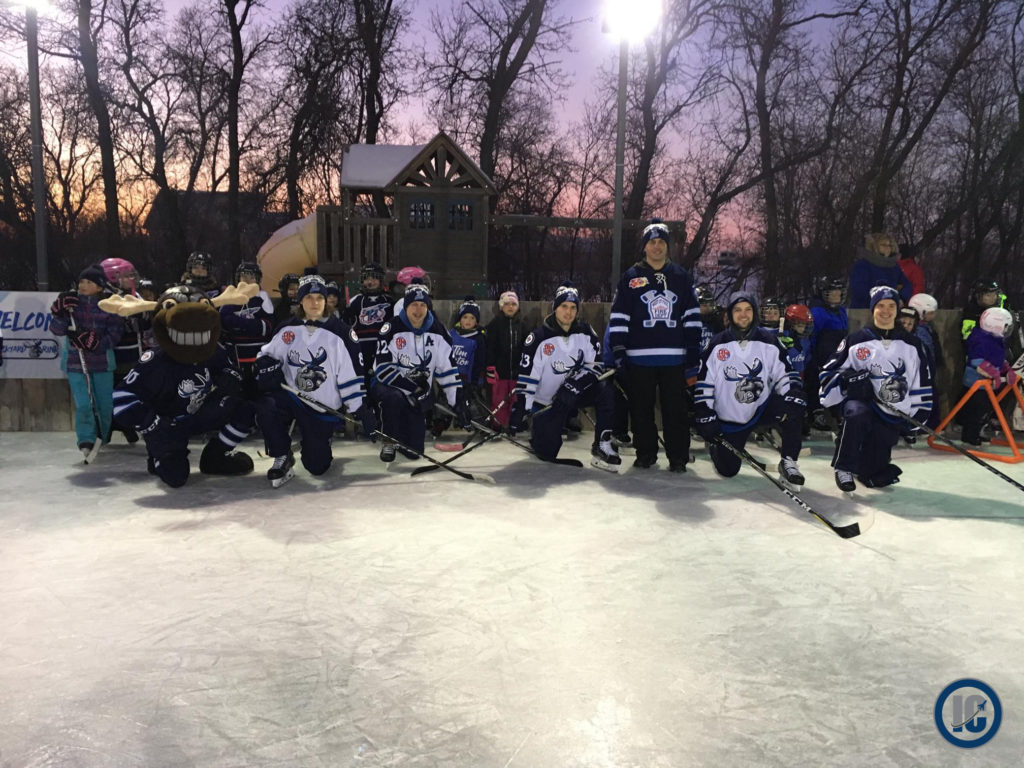 Kory Harnum who is the Moose Manager of Community Relations presented Ken and Kim Azaransky with a team autographed Moose jersey prior to puck drop. 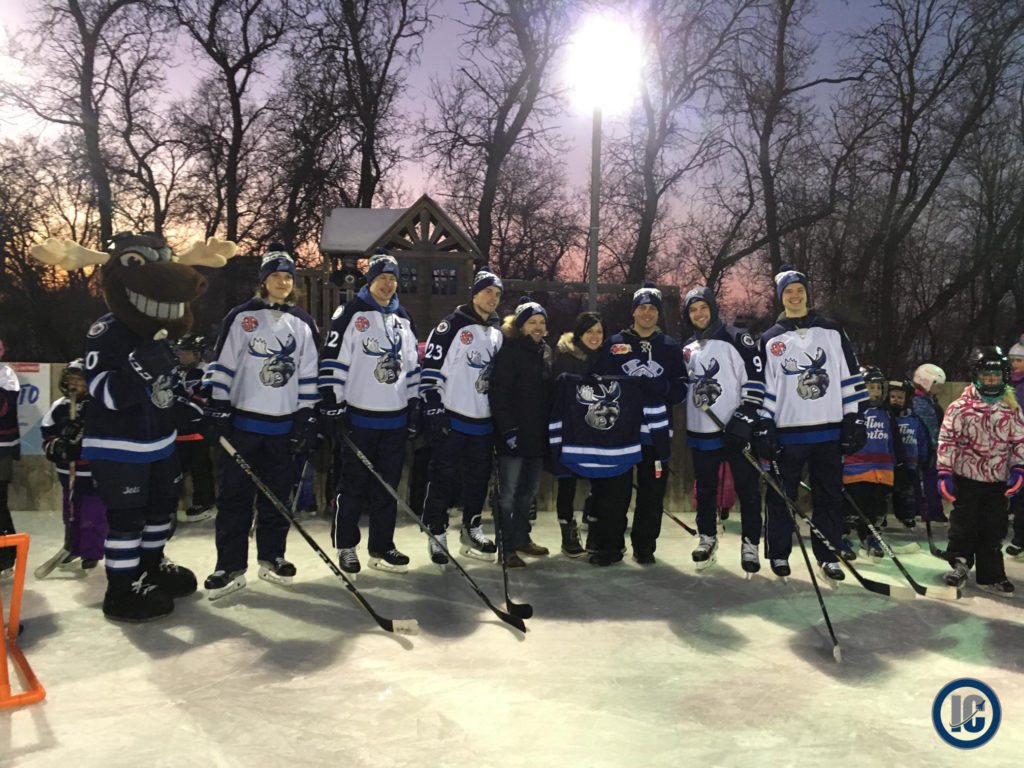 Mitch Peacock, play-by-play announcer for the Moose and I spoke with Ken Azaransky about the process of putting together this rink and how it uniquely came about.  “The right opportunity presented itself when a barn down the street needed to get torn down.  I looked at the trusses and they were all 2 x 8 trusses and I figured I’d go talk to the owner.  I asked him if I could go in there and hack and slash and salvage some of this wood for a rink.  I told him I wanted to build a rink for my kids and he said ‘not a problem, take whatever you want’.  In the rain two Septembers back I was cutting trusses and throwing them in the back of my truck to bring them home, creating an inventory of pieces that I knew that I needed and went about assembling the components of the rink which probably took me about 100 hours.  I made it so it was modular so that it could easily be put up or taken down and as a result you see the rink before you.”

We asked Ken what it means to be participating in this event with friends and family “It’s terrific.  This is my rink on my property but I couldn’t have had this without the help of a great many people.  My good buddy Jeff Hudson from down the street is a carpenter and he helped me make these creative corners including a drink holder that is custom made and insulated that he came up with.  Some of the subtle nuances that made it really special were the result of the friends that came and contributed as well.  But that’s what’s great about this celebration, you are able to share the rink with them and they are having as much fun as my kids and as parents it is just something really special.”

Eventually the players and kids got to the business of playing some backyard hockey. 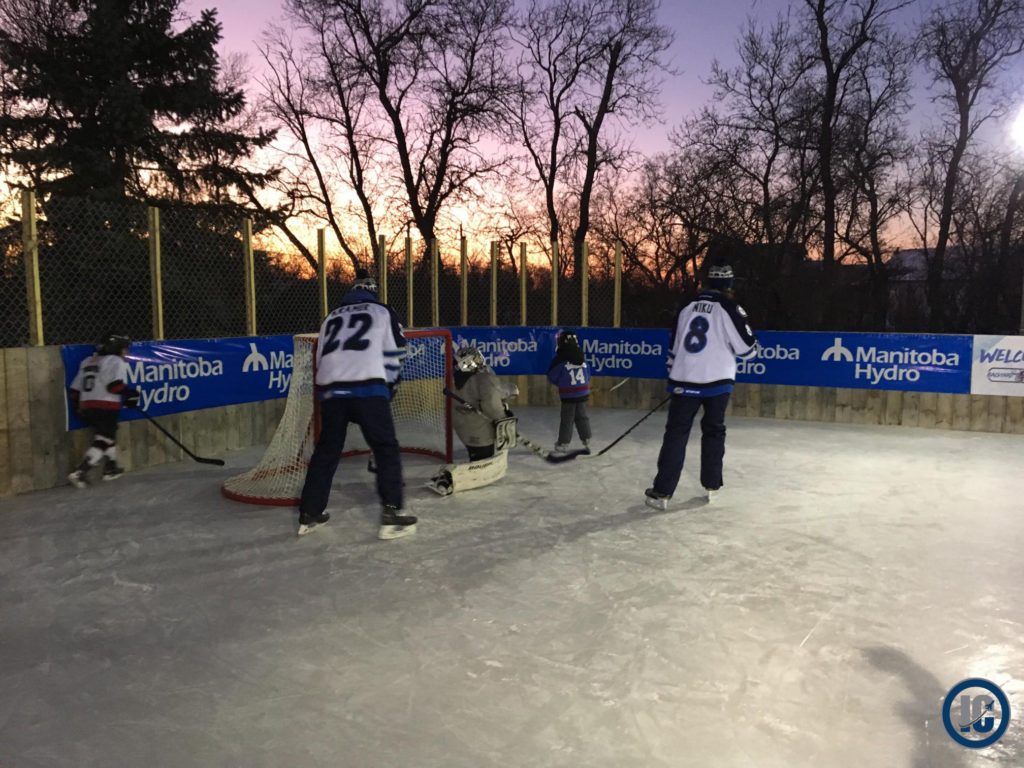 Fans may not know but Darren Kramer has a big appreciation for wood working (to quote Curb Your Enthusiasm “he respects wood“).  So he was already impressed by the job Ken Azaransky had done building this unique hockey rink “I love it.  I like to consider myself to be a bit of a woodworker so whenever I see a project like this I have an appreciation for it.  This was done really well and I can imagine how much fun the kids get out of it.”  It was at this point that I explained the backstory of how Ken had reclaimed the wood from a local barn and I asked Darren if that changed his appreciation for the rink “Ya tenfold.  When I first pulled up and you see the structure I was impressed and now hearing the story behind it that escalates my appreciation for what he has done here.” 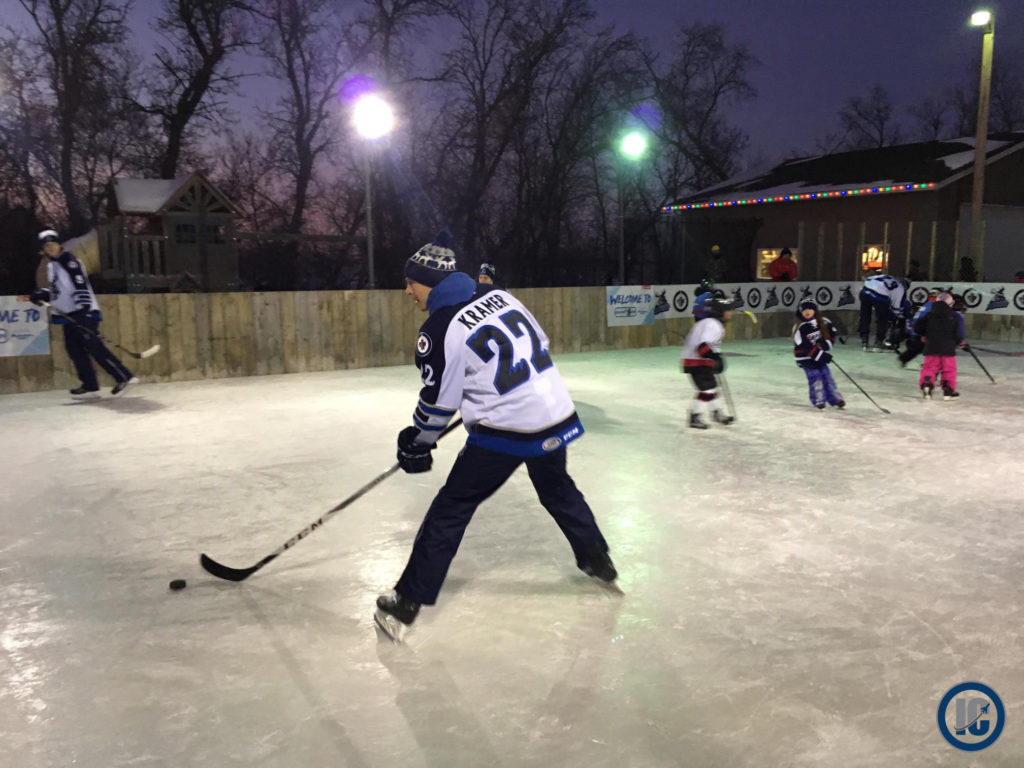 I believe at this point in the skate Chase De Leo was going to check on Eric Comrie, who was enjoying life as a forward a wee too much and had scored 100+ goals.  It was like watching Billy Madison play dodgeball. 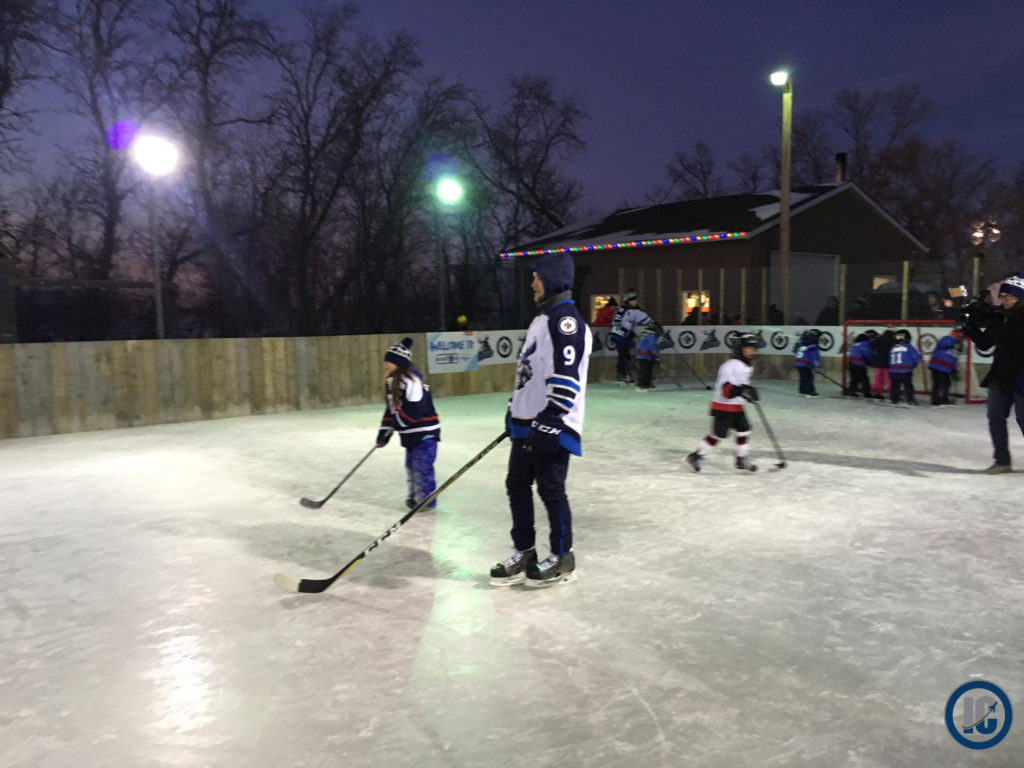 The Moose players had to be pulled from the rink when the evening drew to a conclusion. 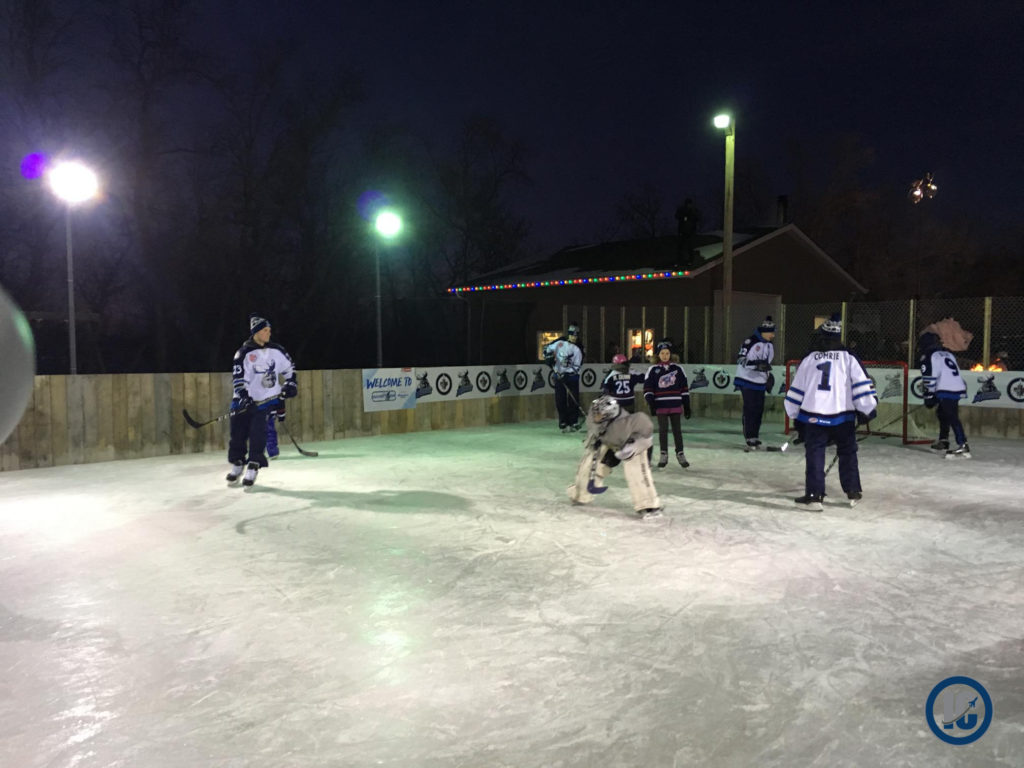 Once back inside the spacious garage the players spent quite a bit of time autographing everything from this unique hockey table to the more traditional sticks and hats and jerseys for their fans. 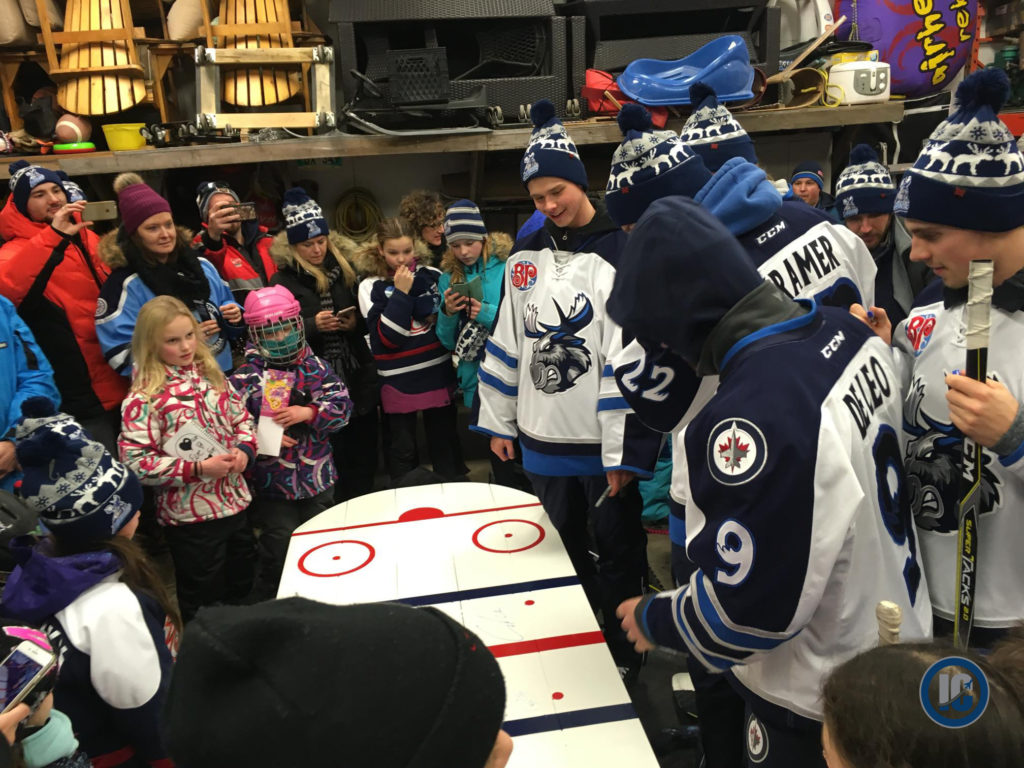 Another solid community event for the Jets farm club which gave fans an opportunity to get up close and personal with some of their hockey heroes.