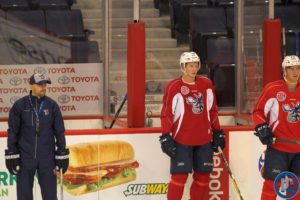 The Manitoba Moose hit the ice at the MTS Centre this morning as they get ready to face the Bakersfield Condors tonight in their home opener.

Chase De Leo:  Starting his sophomore season.  What did the Jets tell him they need to work on in the AHL?  Does it feel different that he is no longer a rookie?  His thoughts on the two games against Iowa.  Different mindset with all the Jets on the Moose roster?  Setting personal goals for the season.

Coach Vincent:  First home opener as head coach of the Manitoba Moose.  What does it mean to him personally to be coaching this team?  What has he liked from his team from the two games they played on the road?  What does he expect from Bakersfield?  On expectations on Lemieux.  Eric Comrie getting the start?