Nic Petan receiving some recognition for his play last week. 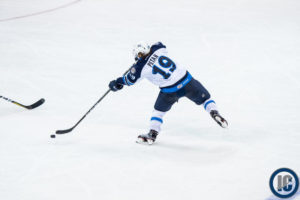 Nic Petan has certainly elevated his play of late and he was recognized by the AHL with the CCM Player of the Week honour after he put up two goals and six assists in three games for a Moose team that is just rolling having won nine straight games and 13 of their last 14.

Petan recorded two goals and six assists for eight points in three games last week as Manitoba continued to light up the scoreboard.

On Tuesday evening, Petan scored a goal and added an assist as the Moose earned an 8-1 win in Rockford. Back home on Thursday, Petan notched three assists in Manitoba’s 7-1 rout of Cleveland. And on Saturday, he helped the Moose to a three-goal night on the power play, scoring once with the man advantage and assisting on the other two in a 4-0 win over the Monsters — Manitoba’s ninth consecutive victory.

A second-round pick (43rd overall) by Winnipeg in the 2013 NHL Draft, Petan has registered three goals and 13 assists for 16 points with a plus-11 rating in 17 games for the Moose after starting the 2017-18 season with the Jets, skating in six NHL contests. The 22-year-old native of Delta, B.C., has collected 16 goals and 37 assists for 53 points in 73 career AHL games, along with three goals and 16 assists for 19 points in 86 NHL matches. Petan played four seasons of junior hockey at Portland, where he was a co-winner of the Western Hockey League scoring title en route to a league championship in 2012-13.

In recognition of his achievement, Petan will be presented with an etched crystal award prior to an upcoming Moose home game.