The Moose bench boss met with the media for his final interview for the 2016 season. 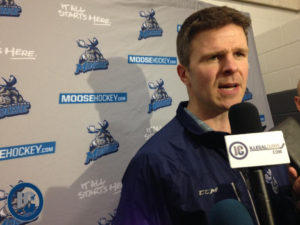 Topics: Summing up the season and what would he take away from it?  Mood in the room during the losing streaks. Can he put his finger on a time/event when he saw that the team was “finally getting somewhere”.  On Hellebuyck being a good pro.  Balancing winning/developing for next season.  What went wrong for Fraser?  Does Raffl deserve another chance?  Would he like to see Raffl get that chance?  Being in the same city as the Jets.  If fans asked “why should we be more optimistic about the Moose next season?” what would he say?  Is Jimmy Lodge’s hat trick a punctuation on that concept?  Player development.  Development of Lemieux and Harkins.  His thoughts on Eric Comrie’s development.  Is there more skill on the roster than the stats show?  On the timeline for prospects development.  On what an NHL game may have done for Brenden Kitchton.  On the growth of Darren Kramer.  On the relationship between Manitoba and Tulsa.  On using the ECHL to develop players.  AHL playoff talk.  Which of his players who may be pushing for a job with the Jets next season?  How many players coming from Jr to the AHL have a 200 ft game awareness?  Does it require redefining?  Does he prefer challenge of developing young players or being in a Calder Cup Final?  How does he as a coach plan to get better this off season?  Did the team develop an identity by the end of the season?  Is there an element he would like to see on the roster next year?