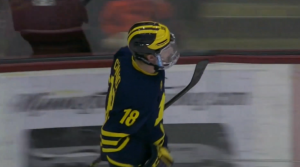 Another pair of games and more points for Jets 2015 1st round pick Kyle Connor who continues tearing up the NCAA for the University of Michigan.  Last night in Minneapolis he had two goals in the 6-2 win over the Gophers, including a beauty on the breakaway.  In 29 games (as of last night) for the Wolverines he had 26 goals and 27 assists for 53 points which is good enough for a five point lead over second spot held by Andrew Poturalski of New Hampshire (who has played four more games than Connor).

Tonight the Wolverines fell to the Gophers 3-2 in OT but Connor picked up a tremendous assist (check out the video here) in the 2nd period to give him points in 19 straight games and his 54th point on the season.

At the start of the 3rd the broadcast duo of Dan Kelly and Ben Clymer of the Big Ten Network spoke about how Kyle Connor is the likely front runner to win the Hobey Baker Award.

We shall see if the streak can hit 20 games when they take on Ohio State next Friday at Yost Arena in Michigan.