Kenora to re-name street for Kroppy; Memorial Pond Hockey Tourny in his name

The Jets superfan is receiving some nice honours in his name.

There are a number of memorable fans of the Winnipeg Jets.  Len Kropioski or Kroppy as he was known by fans passed away at the age of 98 years back in September but during his time he became well known to fans in this city when the war veteran was featured on the Jumbotron during the singing of the Canadian national anthem. 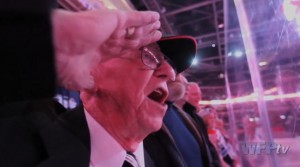 He was a Kenora resident who made the two hour drive to Winnipeg to see the Jets play at the MTS Centre both in good and bad weather.  And for those of you who have made that drive along highway 1 in the winter you know that isn’t an easy task.

Folks in Kenora decided to honour the longtime resident by having McQuillan Street re-named Kroppy Lane. Kenora City Council is still required to approve it when it comes up for vote on January 17th.

Read about it here.

There is still room to sign up so if you are so inclined or for more information click here.