John Albert is off to Finland; Who will be the next Manitoba Moose captain?

The Moose lose their captain, who will be his replacement? 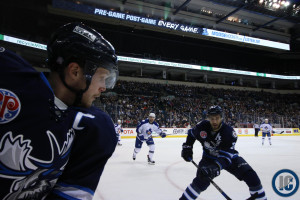 We learned this morning that former Moose captain John Albert will be taking his talents to Finland to play with Oulun Kärpät according to their official twitter feed.  Albert was a 2007 6th round pick by the Atlanta Thrashers who played four seasons with the IceCaps and one with the Moose.  He got into nine games with the Jets during the 2013-14 season which included scoring a breakaway goal in his first NHL game at MSG.

As Jets GM Kevin Cheveldayoff told us the other day the team is not expecting to sign UFA Patrice Cormier who would have likely been seen as a potential captain for this squad with his veteran leadership.

One player I could see stepping up and assuming that mantle might be RFA defenceman Brenden Kitchton who is heading into what will be his fourth season with this organization.  Presuming they get a deal done he is the type of player who doesn’t shy away from questions and appears to be a natural leader on this squad.  Update:  Kitchton signed a one year deal with the Jets on July 8th, 2016.

Another possibility would be veteran defenceman Julian Melchiori who played four seasons with the IceCaps as well as one with the Moose.  He’s played 12 NHL games with the Jets (one in 2013-14 and 10 in 2015-16) and the 2007 Thrashers draft pick could also see a C placed on his jersey.  Melchiori has two years left on his contract with the club.