No Time to Panic.  Rich tells Peggers’ now isn’t the time to lose faith in the process.

Deconstructing Alexander Burmistrov.  Ez gives us some further insight into the makeup of this young gun.

Illegal Curve Radio Part 1 and Part 2.  In part 1 the guys had Blake Wheeler’s agent on to discuss the contract his client had just signed as well as an interview with Tom Gulitti of The Bergen Record.  Part 2 the guys had Shelly Anderson of the Pittsburgh Post-Gazette and Jeremy Rutherford of the St. Louis Dispatch.

Quick quotes from Blake Wheeler.  Remis jumped on the Conference call and brings you these quotes from one of the newest members of the Winnipeg Jets.

Kevin Cheveldayoff Press Conference.  Remis then went down to the MTS Centre to participate in the media scrum with the Jets GM. 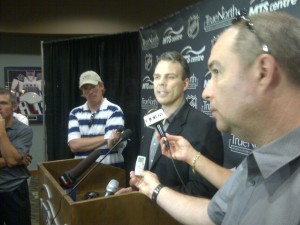 Illegal Curve Sandwich.  After Myers Deli offered to make a sandwich in honour of IC, Drew took it to our readers to find out what they thought should comprise the IC sandwich.  Personally I like reader Tim’s suggestion that it be full of baloney.

The rest of the Jets week on Illegal Curve after the jump.

Value in Wheeler.  Richard gives us an in-depth look at the Jets newest signee and why both sides should be happy with the deal.

Claude Noel press conference .  Remis returned to the MTS Centre to get the Jets coach’s thoughts on the hiring of his new assistant Pascal Vincent.

Winnipeg Jets reveal logo.  Almost as eagerly anticipated as the return of the Jets itself, the city erupted when the Jets broke the silence at 4 pm cst.

Eric Fehr loves the new logo.  Ez and Remis got some quotes from Winkler’s Eric Fehr on his thoughts for playing for the team he grew up cheering for.