Taking a look back at the week that was and catching you up on all the Jets news. Remember that we are always happy to have your input so feel free to share your week in review thoughts.

Welcome to the new Illegalcurve.com.  We kicked off the week with an intro to the new site and reaction has been quite positive to the new format and new logo.

Tanner Glass – fighting still has a place in the game.  The Jets tough guy gives his thoughts on why there is still room for fighting in today’s NHL.

Game Day Preview:  Jets vs. Blue Jackets.  Ezra gives you the first of many Jets game day previews of the two teams.

Claude Noel pregame press conference.  The Jets coach gives his thoughts on the lead up to the 1st NHL exhibition game to count in Winnipeg in 15 years.

Jets on a Deadline:  Jets vs. Blue Jackets recap.  Drew gives a complete game recap but all you need to know was there was a lot of this from the Jets side. 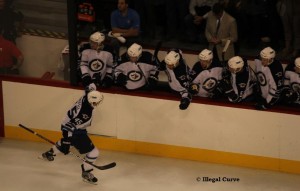 Unmatched Anticipation.  For those unable to be in the MTS Centre, Richard gives you some insight on what it was like within the building in the hour leading up to puck drop.

Looking back at 1st Jets exhibition game – pictorial summation.  For those who want to re-live the 1st meaningful Jets game in ages, here are some pictures from the game.

On the Farm:  The Postma always rings twice.   Ryan with his first contribution to the site, giving us his insight into what goes on with all things IceCaps.

Scheifele-ing Expectations.  Richard tries to temper the enthusiasm of fans about the Jets #1 draft pick.

Under the Microscope.  Remis talks about the media scrutinty that players will be subjected to in Winnipeg.

Jets React to Jody Shelley Suspension.  Down at the MTS Centre remis caught up with some of the Jets to get their thoughts on the suspension.

Winnipeg Jets goalie Peter Mannino Interview (including Mask symbolism).  Learning a bit about his mask and the symbolism behind it.

Part 2 of the IC Radio special ‘Fantasy Hockey’ Show.  Guests included Gus Kutsaros of McKeen’s Hockey who talked busts & Overvalued players and Justin Goldman of The Goalie Guild who not surprisingly was on to talk goalies.

Jets Hour of the IC Radio Show.  The guys spent an hour discussing all things Jets.

The city has now officially been back in the NHL for two weekends but yesterday was the first chance for Jets fans to watch their team playing on the road on a Saturday night.  The people at the party I was at kept remarking about the fact that following the game it was nice to watch Jets highlights (even though they lost) on Sportscentre.  Looking forward to another exciting week of Jets news starting tomorrow with Morning papers.