This evening in Ann Arbor, Michigan the Wolverines were taking on the Golden Gophers in some college hockey action.  Jets 1st round pick (17th overall) in 2015 Kyle Connor playing in his 13th game of the season finished the game with three goals and one assist in his team’s 8-3 win over Minnesota as well as being selected as the 1st Star of the game.  He currently has nine goals and nine assists this season for Michigan. 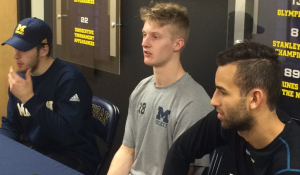 “To do it at Michigan, in front of family and friends, is really special,” – Connor on hat trick via Wolverines twitter.

Interestingly this comes after he was passed over by Team USA for the World Junior team.

To read more about the game here is a recap from the Minneapolis Star Tribune:  Gophers’ hockey falls flat in 8-3 loss to Michigan.