Jets 1st round pick in 2015 picks up a nice December reward for his play. 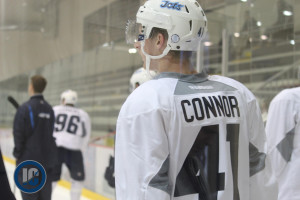 He may have been snubbed by Team USA for the World Juniors (perhaps a decision they are regretting now) but he was certainly recognized by his play in December for the University of Michigan.

“Connor led the nation with seven goals and 13 points in six games during the month of December, averaging 2.17 points per game in that span. He registered at least one point in all six games, including four multi-point efforts.”