Jets on a Deadline – Jets 5 Leafs 4 in shootout

Game recaps, post-game quotes from coach and players, video highlights and the NHL.com 3 Stars of the night.

NHL.com:  Jets blow lead, but get past Leafs in long SO.

Picture of the game:
If this picture doesn’t show that Jets owner Mark Chipman cares about winning, nothing does. 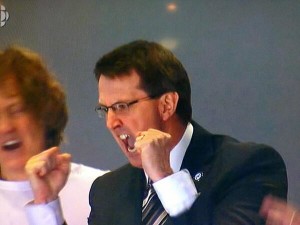 –  “It was a good game for Hockey Night in Canada.  A good game for the station.  I think it was exciting from that stand point.  A little bit too exciting for our liking. We are happy we got the win.”

– “We did some good things.  We did a lot of good things in the 2nd.  It was a little upsetting to see that 4-1 lead go to 4-3 and I think we didn’t manage things there as well as we would have liked to and we should have managed things better which we discussed with our team, which I am not going to discuss with you.  Other than that it was good, we managed it and we got the two points.  And it was a huge two points for us.”

–  “Once a stallion, always a stallion” when asked how he decided to choose Zach Bogosian during shootout.

– “We’ve played well of late, our group has really come together nice.  We’re doing some things good.  Do we still have a ways to go?  Yes!  But you know what, we believe in ourselves and the way we play and we’re happy that we’re at the top, at least for the time being and puts a big price on that game tomorrow.”

To listen to the full audio of coach Noel’ post-game from the ACC click here.

– Evander Kane:  “We realize the position we are in and we don’t want to let that slip out of our hands”.

– Zach Bogosian:  “Evander’s on the ice to score goals.  He is a huge asset to our team and he is a lot better player on the ice than in the box.  It’s just part of being a team, sticking up for each other and I’m not the first guy to do it so we are all in this together and we have to go forward as a group.” 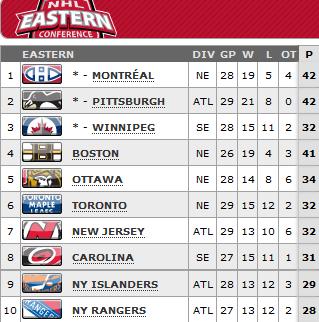