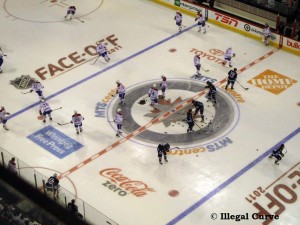 Winnipeg—After the waiting finally concluded, and the pomp and circumstance, which, typical of True North, was subdued and classy, the harsh reality of the 2011-2012 Winnipeg Jets is that they just may not be a very good National Hockey League team.

While time may very well prove that statement wrong, what was abundantly clear from this contest versus the Montreal Canadiens, is that the Winnipeg Jets are not good enough to win, while committing careless turnovers that turn into opposition goals. While the team as a whole did not match Montreal’s energy or talent level, the one who stood out the most was Jonny Oduya, who had a difficult game, with errors that contributed directly to the first two Montreal goals by Mike Cammalleri and Tomas Plekanec. This was the last impact that Cammalleri had in the contest as he left the game after appearing to get cut behind his leg with a skate blade.

The Jets gamely tried to make a game of it, finally allowing the capacity MTS Centre crowd to release their pent up emotion early in the third period with the first Winnipeg Jets regular season goal, scored by Nik Antropov after a scramble in front of Carey Price.

With the MTS Centre rocking, the Jets had the momentum and while controlling the puck in the Montreal zone, Dustin Byfuglien was issued a penalty for a phantom interference call that only the referee in charge could see. As is wont to happen after a poor officiating decision, the Habs capitalized and a one goal game became a two goal Montreal lead.  As soon as the shot hit the back of the twine, off the stick of Yannick Weber, it became abundantly clear that the Canadiens were on their way to victory, spoiling the hopes of the Winnipeg crowd, who, to their credit, didn’t seem to notice the score.

For those who subscribe to shots on goal as being an important stat, today’s game was a crystal clear example of why the stat is over-rated. While the Jets out-shot the Canadiens by a 31-22 margin, at no time in this game was the pace being dictated by the Winnipeg squad. The bulk of the Jets shots were from the outside, with minimal to no traffic in front of Carey Price, and befitting of one of the best goaltenders in the NHL, he turned away the meek efforts with little difficulty, and exceptional rebound control.

The Habs wrapped up the scoring with 2 more third period goals, the first by Travis Moen and the latter by Max Pacioretty. He has recovered from his battle with the stanchion and Zdeno Chara that caused such a kerfuffle last season. The Winnipeg crowd gamely stayed until the end, cheering their returning NHL team to the bitter end, which, if tonight is any indication will be the routine, and not the exception this season.

Entering into tonight’s game and by taking an un-jaundiced look at the roster the Jets were slated to ice on a regular basis, it was readily apparent they had to have an exquisite effort night in and night out to be successful. Tonight’s contest with the Canadiens was a cautionary tale in what will happen when the Jets don’t outwork their opponents.