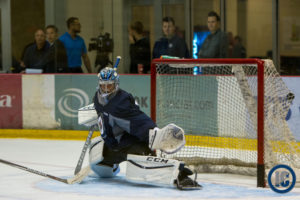 We already knew that Mark Scheifele and Josh Morrissey would be heading over to Europe next month for the World Championship but you can add goalie Eric Comrie to that list according to the Hockey Canada release today.  Comrie has become the Moose #1 goalie in his sophomore season.

Comrie, 21, made his NHL debut earlier this month on Apr. 6 against the Columbus Blue Jackets, stopping 35 of 39 shots in a 5-4 win on the road. He recently finished his second season with the AHL’s Manitoba Moose, going 19-26-2 with a 2.96 goals-against average and .906 save percentage this past season. This is Comrie’s first trip to the World Championship, but he has represented Canada three times previously. He played for Canada Pacific at the 2012 World U17 Hockey Challenge and a won a gold medal playing for Canada at the 2012 Ivan Hlinka U18 Memorial Tournament and 2015 World Junior Championship.