A chat with the Jets GM 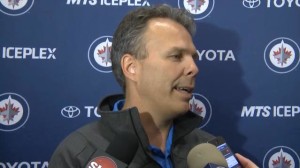 Jets GM Kevin Cheveldayoff spoke with Daren Millard, Nick Kypreos and Doug MacLean on the Hockeycentral Panel about the risks young hockey players face with their finances, is there anything the NHL clubs can do, is his team for real, on the performance of his goalies, on Blake Wheeler’s fighting and what it’s meant to this team, on Kane’s lack of scoring, on negotiating Kane’s contract, on Hextall’s antics, how badly would his team have to play for him to go down to the room to send a message.

The chat with Kevin Cheveldayoff ends around the 12 minute mark and the guys ends the interview talking about the Jets.