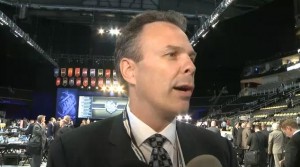 “He’s someone that provides a lot of different qualities that we’re looking at in acquiring players. He’s a big strong defender that will be tough to play against, he loves to play a hard hitting game. But his character is something that is exceptional as well. He’s been a captain on different teams, and loves to play the game, from all aspects of it we’re happy and the draft is so unpredictable we’re very fortunate to get him where we were.”

“We didn’t get to the ninth guy, but he was well up on our list. As it started to unfold and get closer and closer to our pick, we started to get an air of excitement that there was the possibility that he would fall into our lap.”

On the qualities Trouba possesses:

“I met him at the combine, had some great conversations with him. He’s a genuine kid, he’s got real good charisma, you can just tell that he’s got a personality; he loves to play the game. He was very relaxed, very confident in the interview, but the way he plays the game, he plays it with a real passion, and excitement for the game. With his size, and with the strength and size we hope he’s going to continue to put on, we’re very excited about that.”

On the possibility of calling up the 9th overall pick before his four year term at the University of Michigan is complete:

“Obviously we’ll see how things progress, but again it’s all about continued development for him. I think it will be a good opportunity for him to be in a good program and play. At the end of the day, it’s no different than any other player, when he’s ready to play, we’ll make the push to see him play.”

“Anytime you have a young player, you have to be patient, that’s just the way it goes. He’s a piece of the future puzzle for us, when the future becomes the now, we’ll see how that all unfolds.”

On the number  of times he saw Trouba play in person:

“Three or four times actually, probably as recently as the tournament in Europe at the end of the season. He’s someone that’s shown good leadership ability with all the teams that he’s played; his teams have had success ultimately on the championship side of things. He’s excited to be a hockey player, and excited to be a Jet.”

“He is someone that competes very hard in all aspects of the game ,that’s why you love those kids when they play in those kind of tournaments where they are representing their country where there’s lots on the line, because those games matter. They go to become formative towards their character. The wins do some things for them, but the losses instruct as well.”

On the trade discussions involving the pick:

“There was a lot of talk, but there was not a lot that really transpired, obviously there weren’t any deals that were made. As it turns out, we didn’t have to move up to get someone in an area we would have to move up for.”

On the reaction at the draft table after Pittsburgh acquired the 8th overall pick:

“Anytime there is a trade that’s made involving a pick that’s right in front of you. You kind of wonder what they are thinking. You at least have studied the teams above you, before the pick to see what their needs might be, or where it might go. Certainly when that trade was made, you’re sitting there for a couple of seconds and wondering.”

On the strategy for the rest of the draft:

“There hasn’t been much sleep at all leading up to this, but that’s the excitement about it, now thirty picks are in the books, you take a look at your list and see where different things may fall into place. Obviously there’s still some picks ahead of us in the second round that leads to some unpredictability. I think, like you’ve seen in the first round, there will be some interesting selections all over the map in the second and subsequent rounds.”

On the type of players the Jets are looking for during day two:

“There are obviously many different needs within the organization that you hope to address at different areas. Taking a defenseman with the first pick certainly adds to the stable of prospects in those regards. But you really have to look long and hard a the people who are around when your pick is coming up. Do you tend to shift towards to a position, but again, you have to look at the names that are around there.”

On the progress made in negotiations with the Jets’ RFAs.

“Not much (progress was made in negotiations), today was mostly a day of focusing on the draft. Tomorrow will be as well. Tomorrow’s going to be an interesting day, because as long as it took for one round today you’ll probably squeeze the rest of the draft in. Things will happen at a different pace tomorrow, and certainly you have to be on your toes from a selection standpoint. That’s going to be the main focus of the day.”