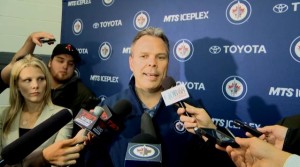 Five days of Development Camp came to a conclusion today. The Jets GM met with the media today to discuss the week that was as well as addressing the Evander Kane topic.

Kevin Cheveldayoff –  What was most exciting for him this week?  What is greatest progress the organization has made?  Does he see anyone from the camp having a shot at the Jets roster in the fall?  Thoughts on Nikolaj Ehlers.  How often did he inject himself into player interactions during the week?  Should fans have concern about the Evander Kane situation?  Would he just like to hear Evander say “he’s happy to be in Winnipeg”?  Has he ever expressed interest in being traded?  Any free agents catch his eye this week?  Signing free agents? Is there a greater interest from college kids in the camps?