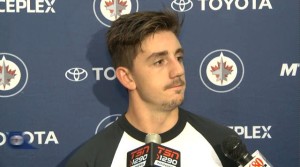 Selected in the 2013 NHL Entry Draft, Nic Petan spoke with the media today following day 3 on the ice with the other prospects.

Nic Petan –  What is the difference coming to camp this year?  How has he changed in the last year?  Does he notice differences in his day to day approach?  On being a vet.  Does he have any goals/targets this season?  Expectations.  Does it help him?  What is summer like when he’s played so much hockey?  Does he watch the NHL and see how his game could fit in the pros?  Is there more to his game than simply being “offensive”?  What has Mike Johnston meant to his career?  Fortunate to have been coached by someone of his caliber?  What has he thought about the talent on the ice?  Has he ever had people tell him “he’s too small”?  What does he say to them?  Does it make him more physical?