Coach Vincent has another example to help him guide future Jets prospects.

The path to reach the NHL is obviously not an easy one and many players will not be ready to make the jump straight from junior or college into the top hockey league in the world.  Oftentimes they will first play in the AHL or even the ECHL before they realize their ultimate goal of making it to the NHL. For every Patrik Laine (who played with men in the Finnish liiga for a season) there a bunch of other prospects who require time in the minors before making the jump.

The AHL puts out a stat every season referencing the number of guys in the NHL who have spent some time in the AHL.  This year that number was 82%.  If you look at the Jets roster the list of their draft picks who spent time with the Moose includes Mason Appleton, Kyle Connor, Andrew Copp, Jansen Harkins, Adam Lowry, Jack Roslovic, Josh Morrissey, Sami Niku, Tucker Poolman and Connor Hellebuyck.  Which means every Jets draft pick currently on the NHL roster with the exception of Mark Scheifele and Patrik Laine spent some time in the AHL.

In our chat on Monday I asked Pascal Vincent whether Jansen Harkins, who is probably the most intense/focused prospect I’ve watched around the rink, would be a good example for him to use with future prospects who battle their own non-linear path as they attempt to reach hockey’s highest level.

“It’s going to be an example that I use for a long time” said the Moose bench boss. 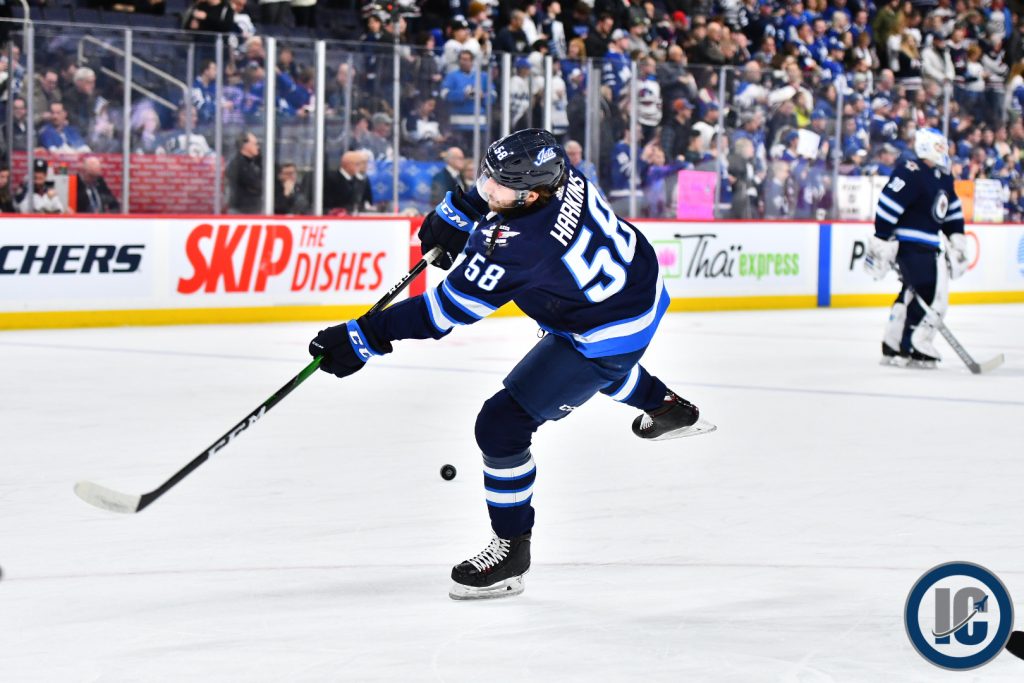 While Harkins has now played 29 games for the Winnipeg Jets this year scoring twice and adding five assists you might recall that the 2015 2nd rounder was re-assigned from the AHL to the East Coast Hockey League in January of his rookie season.  When a prospect is sent down to the ECHL it is generally perceived by the public to be a negative.  But Moose coach Pascal Vincent doesn’t see it that way “We believe in our ECHL team as being part of the development tool.”

Back in 2018 coach Vincent indicated to me that Harkins was being sent to the Jacksonville Icemen of the ECHL to get him playing bigger minutes and that it was only for a pre-determined number of games and he reaffirmed that in our conversation on Monday. “When we sent him down we told him he’s going to play a certain number of games and it’s not a demotion, we want him to play minutes because at that time he wasn’t always a player (in the AHL). We sat down with him and told him the plan and again no complaining from him. He asked a few questions as to what he needed to work on but no complaining. He went down there and I know he kept a good attitude. Sometimes it’s an issue when a player goes down, either from the NHL to the American League or the American League to the East Coast Hockey League and there’s a little bit of an attitude there and he didn’t have any of that. He just went there, did the job, and came back up a little bit better. He bought into it, came back and he was better and I think that was a big step to building his confidence.” Harkins played six games for the Icemen scoring twice and adding four assists before being recalled by Manitoba in February of 2018.

That clear communication between coach and player on the value of re-assignment probably went a long way in not crushing the spirits of the young BC product during his rookie campaign. 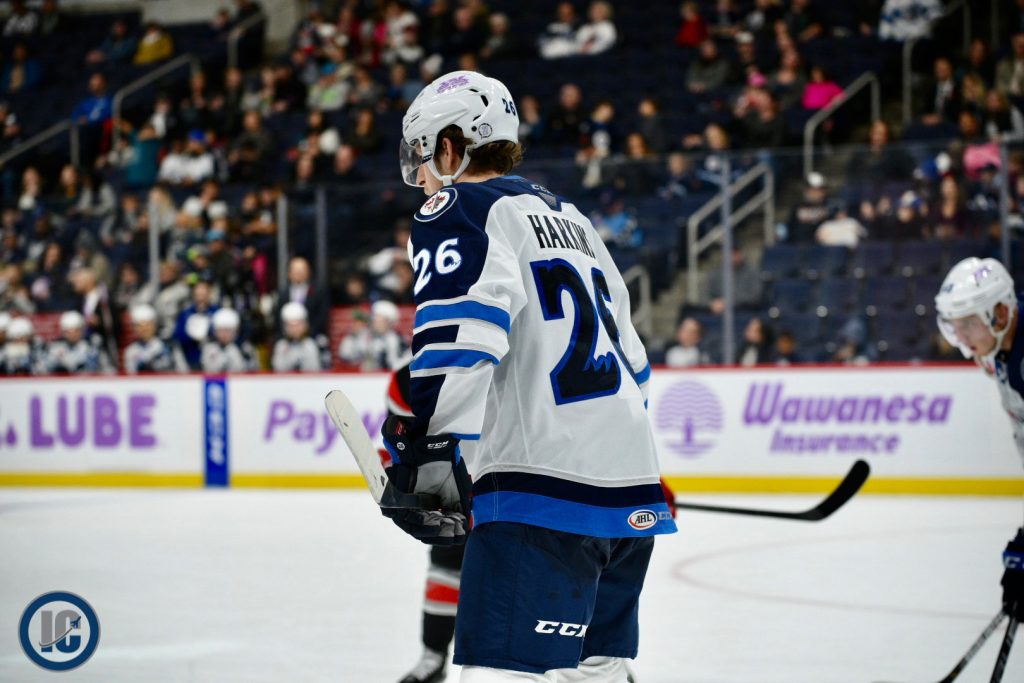 Coach then spoke to the value Harkins path has as a teaching tool for future prospects.

“It’s a huge thing for us to explain to other players in the future. Hey it can be done, this is the story of that guy Jansen Harkins. When you have a success story like this it’s huge for the future and how we’re going to speak to our players, why we do it, why it works. The bottom line is the players want to know how we can help them achieve their goals. If going to the East Coast is going to help me achieve my goals to play in the NHL, then he’s going to do it. Now is it going to work?  We don’t know but we think at that moment it’s the best way to go. Everybody is different. For Jansen it was all about playing minutes. We knew he could shoot the puck, bring some offence but we wanted him to play minutes and be the guy that can be on the ice when the game is on the line. Build that confidence because if he can do it at that level then he could do it at the next level.”

As I wrote on Monday, coach Vincent called Jansen Harkins his best story of the season for Manitoba and he now references Harkins in the same breath as other prospects like Kyle Connor and Jack Roslovic that the Manitoba bench boss doesn’t expect to see back in the AHL. 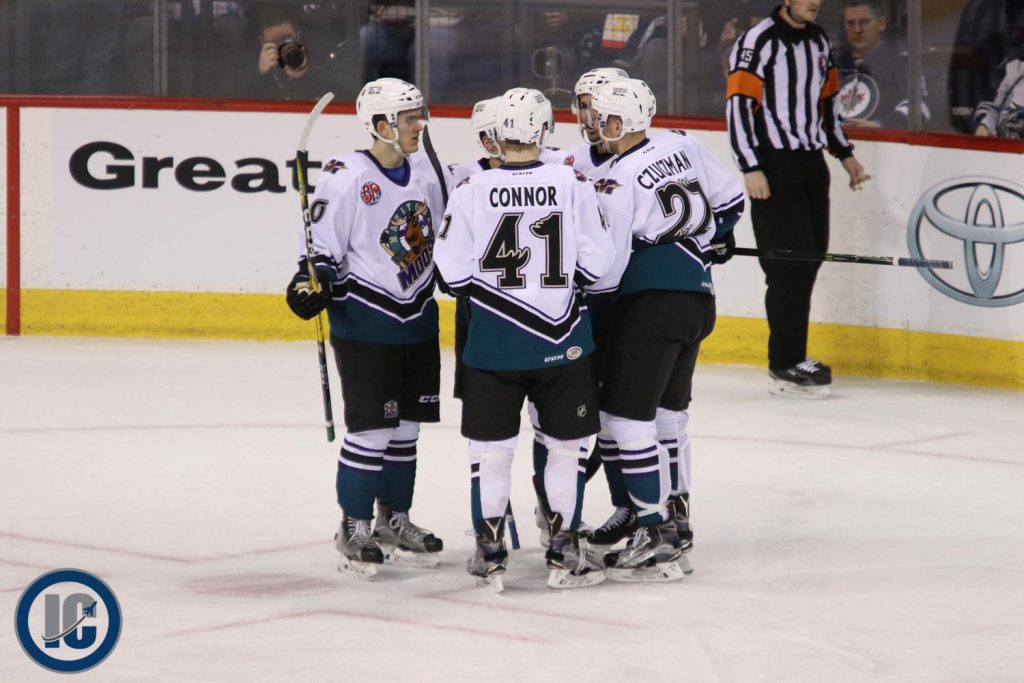 Speaking of the journey those two 1st rounders took (often together):

Jets 2015 1st rounder Kyle Connor was sent down in his first season as a pro back in 2016-17 after the prolific goal scorer in college scored just once in his first 19 games with Winnipeg.  He would score eight times in his first 32 games with Manitoba and then it just clicked for the speedy winger who went on to score 17 goals in his next 20 games.  He would see just four more games in the AHL to start the 2017-18 campaign but hasn’t looked back since.

Their other 1st rounder from 2015 Jack Roslovic spent the 2016-17 campaign with Manitoba up the middle, often with Kyle Connor on his wing.  The Columbus product was fantastic in his rookie season as a 19 year old in the AHL as he lead the Moose in scoring (13G 35A in 65GP) and earned an invitation to the 2017 All-Star game. His sophomore year in pro hockey would start again in the AHL and it was clear that the second-year pro’s game was even stronger. He would get a second straight All-Star nod for Manitoba that season and on December 23, 2017 sat 1st in AHL scoring with 35 points (15G 20A) in 31 games. A week later Mark Scheifele was lost to the Jets for 6-8 weeks with upper-body injury and Jack Roslovic saw his time in the AHL draw to a close.

There are plenty of other examples that the Moose coaching staff can reference to future prospects as to why, regardless of the path you take, some seasoning in the minors can do a player a whole lot of good in helping them make it to the NHL.