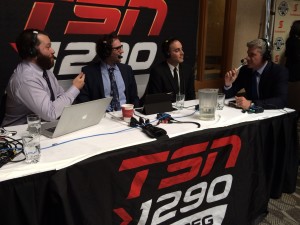 The guys had quite the chat with half of the legendary duo Jay and Dan from TSN (now of Fox Sports 1) as Dan O’Toole was hosting the Hockey Manitoba 100th Anniversary Gala.  While we would love to say it was a high brow conversation about the latest hockey news a significant portion of the interview was spent on a mystery hair on the table.  Plenty of laughing in this chat.