Coach Maurice provided an update on the status of Matthias. 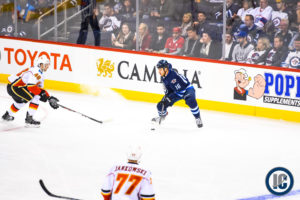 At the end of Coach Maurice’s pre-game scrum in Calgary he was providing injury updates on a number of players (Perreault, Peluso, Olsen and Myers) who skated on their own at the IcePlex today.  The Jets bench boss indicated that he believes they are all ready to go (all have been cleared for contact) although they may not all get into tomorrow night’s game at the MTS Centre against the Senators.

He also indicated that Shawn Matthias who had to leave the game last Tuesday against the Flames in Winnipeg with an upper body injury was listed as week-to-week.  Matthias joins Brendan Lemieux who according to coach Maurice also remains week to week after being injured back during the Young Stars tournament on September 24th.

Update:  The Jets released their game and non-game groups.  Perreault, Peluso and Myers are all playing tonight so they are over whatever ailments they were dealing with.  Olsen is skating with the non playing group.