Coach Maurice gives some info on when he expects to see these two veterans back for the Jets, 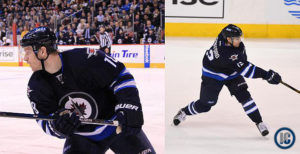 While this Jets team has proven resilient in the face of numerous injuries to their forward group, helped by an influx of players from the Manitoba Moose, we are getting closer and closer to seeing the return of some vets back to the lineup.

First up is Drew Stafford who swapped his yellow non-contact uniform for a regular one.  The problem for the winger is that he hasn’t had a full practice yet with the team, something coach Maurice had indicated he wanted for Stafford.  Today in his pre-game chat coach Maurice again affirmed that Stafford will be the first returnee from injury but as to when he plays remains a mystery.  The Jets bench boss indicated that Stafford reacted “well” to the skate in Boston on Friday but also said “he won’t go tonight”.  Adding “we are going to look at either Carolina or Minnesota.  The interesting thing for us for Minnesota is we’d actually be able to get him in a practice which is what I would like to do, to get him out there with some chaos, a lot of bodies moving, as close to a game feel.”  My guess is they wait with Stafford until Minnesota on Wednesday.  Gives him a few more days of recovery plus he will be able to practice in advance of the game.

Bryan Little was originally slated to return to the Jets lineup at the end of November and it appears that timeline is holding as coach Maurice said today “Bryan may well be the next player in but it will still be at least another week”.  Of course does “in” mean regular practices or a game?  That remains to be seen.

It is also interesting since in our last Jets Injury Report on Monday coach Maurice had Stafford and Perreault in the “short term group” while Little was in the “middle group with Kyle Connor and Tyler Myers.  Guess that means that Mathieu Perreault isn’t progressing as well as the coach thought last week.