With the Jets up 1-0 and the team pushing to extend the lead Blake Wheeler was hauled down by the Ducks Kevin Bieksa.  That play drew the eye and a penalty by the referee but what was missed was Corey Perry heading straight for Mathieu Perreault. 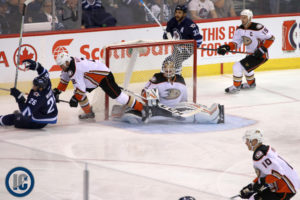 The Ducks winger, who is well known for his stick work, slashed Perreault in the arm, forcing 85 to leave the game just 3:02 into the 1st period.

The slash from Perry on Perreault.. I’m sure it’s ok though because Perry is a “star” right? pic.twitter.com/aJMnK10z4t

The Jets announced that Perreault would not return for the 2nd period after suffering an upper body injury.  He played just 2:36 of today’s game.

Following the game coach Maurice confirmed that “He’s out. He won’t play tomorrow.”

Update:  For those hoping that Perry would be punished it turns out he will not be facing any justice for his stick work according to Paul Friesen of the Winnipeg Sun: