Dano left in the 1st period and will not return. 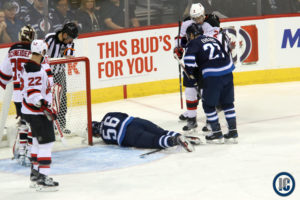 Just when it looked like the Jets were getting healthy another potential injury to the forward group as Marko Dano took a Kyle Quincey stick to the face.  The Jets reported that he won’t return for the game with an upper-body injury.  We won’t likely know the extent of the injury until coach Maurice meets with the media tomorrow.  He was able to skate off on his own holding a towel to his face.

Coach Maurice spoke about Marko Dano’s injury in his post-game presser indicating that “What I can tell you is he got split with a stick in his eye but his eye we believe right now is good and solid.  So, we’re hopeful with that but this takes a few days possibly to see how much bleeding, if any, there is so it’s day to day now before he’s out of the woods.”

More from the Jets bench boss on the actual injury “It’s on the outside.  He’s got some cuts but we think the eyeball itself is fine”.

Quite the birthday for Marko Dano who is celebrating his birthday today. He tweeted these photos of the aftermath of his injury.

Coach Maurice spoke following today’s optional skate at the MTS IcePlex and indicated that Dano was “doing really well.  He will have another appointment tonight just to make sure that nothing has changed since the first look at it and if he’s cleared and the swelling subsides, we believe it will, he will be available to play.”

As always keep it locked to illegalcurve.com for any and all Winnipeg Jets news.