It has been quite the year and we take a look back at some of the most viewed, commented or interesting stories of 2011.

What a year 2011 was, the city has been lit on fire by the return of the Winnipeg Jets and the NHL to the city of Winnipeg.  It has provided us with some of the most memorable moments in the site’s and the radio show’s history.   We bring in 2012 by remembering the best of 2011.

If you recall the site had been on hiatus for a year while we focused on the radio show, which made its transition from 92.9 Kick FM to Sports Radio 1290, which is now known as TSN Radio 1290 in late 2010.  Illegalcurve.com was re-born in March of 2011 as we kicked off a new daily feature entitled Drama in the Desert.  We discussed every piece of news which dealt with the possible re-location of the Phoenix Coyotes.  From President & CEO of the Goldwater Institute Darcy Olsen to the various and very memorable members of the Glendale City Council (I’m looking at you councillor Lieberman).  Who could forget the TSN Jets meter which played with our hearts at every increase/decrease. 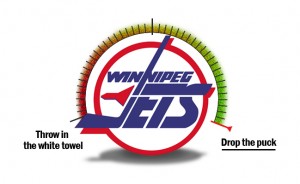 Of course we knew back in November 27th, 2010, following an appearance by Deputy Commissioner Bill Daly on the Illegal Curve Hockey Show, that the Atlanta Thrashers were also in the relocation conversation.  We even had a Dixie Drama daily post as the hockey world began to turn its attention to the Thrashers.

Eventually it culminated in the announcement in May and has been a whirlwind ever since.  Who would have believed that a year ago today, the Jets were a defunct team from our past, to the present where the Jets 2.0 are battling for a playoff spot and are coming off a December to Remember.

Here are some articles from the past year that we thought you might enjoy.

TSN Jets FAQ – After the announcement of TSN Jets, customers were confused regarding the distribution of the channel. Michael Remis created this handy FAQ to answer all of your questions.

Breaking News: Winnipeg Jets Reveal New Logo – There was much speculation and excitement around the new logo. After a picture of a t-shirt was leaked online, the Jets were forced to announce the logo early. Thousands of fans flocked to the Jets store at MTS Centre to purchase new merchandise.

The incredible odyssey of AllyK, the intrepid out of town fan who vowed to be at the 1st Winnipeg Jets game – Dave Minuk chronicle’s the amazing story of Ally K, who went on a journey from Ohio to Winnipeg, just to be at the home opener.

A pictorial summation of the Winnipeg Jets home opener and from the 1st home exhibition game.  If you weren’t able to enjoy the games live, here are some photos from both of these momentous days in the Jets 2.0 new history.

Behind the Music: Winnipeg Jets – When visiting MTS Centre for a game, fans aren’t just going to a game, they are getting a hockey experience. We spoke with True North’s Director of Event Production, Kyle Balharry and he explained his contributions to the incredible atmosphere that has been created at Jets home games.

Why the Jets home opener against the Canadiens needs to be a Whiteout – With a new franchise, there was much speculation if old traditions would be carried forward. Dave Minuk gives his reasons why the home opener should be a whiteout. Despite his arguments, we have yet to see a whiteout this season, and it remains to be seen if there will be one at all.

Wither the Whiteout – Drew Mindell asks if we should continue the tradition of the whiteout.

You Can’t Hold Winnipeg Jets Fans Down This Summer – Taking a look back at summer 2011, one of the greatest in the history of Winnipeg.

Blending Together Past and Present – How to keep old traditions while forming new ones.

The Science of an Intro Song – After the team was announced, there was much speculation on what song the team should skate out to, we speculate on potential (and very dated) opening tunes.

We’ve Got Depth: A Look at the Updated Winnipeg Jets Depth Chart – In the middle of the summer, Ezra Ginsburg took a look at the teams depth. It looks like he was right as the team’s depth on defense has been invaluable to the team this year. Notably, Mark Flood has stepped up beyond anyone’s expectations. When this post was made, Ezzy had listed Flood as his last defenseman on the depth chart, even behind Andrey Zubarev.

Scheifele-ing Expectations – After Scheifele-mania took over Winnipeg in September, Richard Pollock took the opposite view and gave his reasons why Scheifele should be sent down.

Five Reasons why the Jets Will Make the Playoffs – Ezra counters with his five reasons. At this point he looks to be spot on, youth, defensive depth, goaltending and home ice advantage have been major factors leading the Jets into the playoff hunt.

How Good is Ondrej Pavelec – Before the season began Ezra Ginsburg wondered how good the Jets goaltender can be. Fans have now seen that he can carry this team on his back.

Why Let Anthony Stewart Get Away For Nothing? – When the team did not make a qualifying offer to Anthony Stewart, Richard took a look at reasons why they should have.

Why Keeping Zach Bogosian is the Most Logical Option – Written amidst internet rumors of the Jets shopping defenseman Zach Bogosian in the offseason.

Analyzing Rick Dudley’s Tenure as Thrashers General Manager – He was the General Manager of the Thrashers before he was let go for current GM Kevin Cheveldayoff. Richard Pollock grades each transaction made during his tenure.

Read what our prospects expert said about these players before the season.

Also don’t forget to order your IC touques for the winter.

We welcome you to use the search function and menu bar to find other articles that may be of interest.  We thank you for reading Illegalcurve.com and listening to the Illegal Curve Radio Show.  We wish everyone a happy and healthy 2012.

Please continue to tune into illegalcurve.com and the Illegal Curve Radio show for all the latest Winnipeg Jets news.