The Illegal Curve team takes a look back at 2012 and gives our thoughts on the year that was.

While we are eagerly awaiting the potential start of the 2013 NHL hockey season and the return of the Winnipeg Jets for their 2nd season in Winnipeg, the IC team is looking back at 2012 in our Year in Review.

While it is impossible to list all the incredible things that happened during 2012 here are some of our highlights.  Feel free to share yours as well.

David:  For me I’d have to say the Tim Stapleton OT goal against the Washington Capitals in March.  It was important as it kept the Jets in the hunt for the playoffs and it was memorable as I was in Vegas and we watched it in the sports book.  While everyone was enjoying NCAA basketball we were watching the hockey game and this goal stood out as Stapleton capped the comeback for Winnipeg.

Richard:  Eric Fehr’s first goal. After a season long slump, Fehr scored with a wrist show down the right side at home and the fans showed how supportive they were with a huge salute.

David:  Without question for me this would have been the Teemu game but since we are restricting this to 2012 I would have to say the OT loss to the Flyers on February 21.  The Jets had the lead, Wayne Simmonds tied it for the Flyers with 10 seconds to go in the 3rd and then lost the game in OT despite a great night by Ondrej Pavelec who put on a 50 save performance in the loss, including the save which garnered him play of the year from TSN. 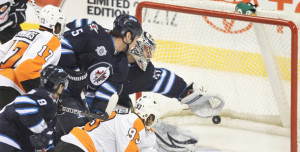 Richard:  Beating the Leafs on February 7.  Because nothing is more fun than beating the Toronto Maple Leafs.

Drew:  The majority of the “most memorable” Jets games of last season happened in 2011, so I will choose the final regular season of the year, eventhough it was a Jets loss to Tampa Bay (Saturday April 7, 2012.) The crowd got one last opportunity to stand and scream (which they did all game long), and demonstrated their class and knowledge of the game by standing and saluting Steven Stamkos for scoring his 50th goal of the year.

David:  While he wasn’t know for his pugilism, I’m gonna give the nod to Jim Slater’s fight with Brooks Laich in the Jets and Capitals game on March 23 in Washington.  With the Jets down 3-1, Slater took a shot in the back off the face off from Laich and threw down the gloves.   Perhaps this was the turning point as the Jets mounted a comeback and won with what many of us have described as our most memorable Jets goal of the year by Tim Stapleton in OT.

Drew:  Tanner Glass v. Adam Burish (March 14, 2012 v. Dallas) Burish takes Tanner Glass’s glove and throws it into the crowd, while on his way to the penalty box–Glass goes after Burish and the fight occurs (technically neither guy got a fighting major, but those are insignificant details).

David:  While I am an infrequent radio show contributor I have been fortunate to be on for a couple of very enjoyable radio show moments on the IC Hockey Show on TSN Radio 1290.  While the Movember shave off was memorable for Ez and I, the fake Drew call to wrap up the 2012 season was simply radio gold. 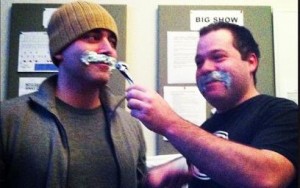 Richard:  Having the opportunity to work the trade deadline show and pick the brain of former Columbus Blue Jackets coach Scott Arniel.

Ezra:  The inaugural interview with Fake Drew live from Kentucky on December 29, 2012.

Drew:  I have two memories that stand out.  1) Most informative & interesting interview was our interview with former NHLPA Executive Director Paul Kelly.  2) Most hilarious moment was when Ezzy leaned back in his chair, and the back of the chair snapped off, sending Ezzy tumbling to the ground.

Remis:  Live at the Free Press Cafe for the trade deadline.

David:  Without question this was the frequent chants of GST GST that reverberated across the MTS Centre throughout the season by the 15,004 fans who embraced the line of Tanner Glass, Jim Slater and Chris Thorburn.  The line was conceptualized by Ez and Jay and pushed by myself and luckily the media and fans embraced the nickname.

Richard:  Getting to spend time with my IC bretheren.

Drew:  It was a short, one year phenomenon, that blew out of our lives as quickly as it entered, but the GST line and subsequent chants were so entertaining that they get my vote.

Remis:   Tough to choose between the crowd chants and the return of the queen.

Highlight of the Season:

David:  Unfortunately I lost one of my closest friends, Richard Tapper this year but a highlight for me was that Richard, who was a massive Jets fan, had the opportunity to experience the return of the Jets (something he had predicted for years) and got to a number of Jets games at the MTS Centre.

Richard:  Seeing NHL stars in Winnipeg for the first time in 15 years.

Drew:  Keeping in mind that I’m restricted to events from 2012, I would say the 2 game/2 day stretch on Thursday February 16 & Friday February 17 when the Jets beat the Wild in St. Paul (with thousands of Jets fans in attendance, turning a road game into a home game), and the next night back in Winnipeg when the Jets finally won the 2nd half of back-to-back games, and completed the home-ice season sweep of the Boston Bruins.

Christmas Day Off
Lockout is over! Welcome back the NHL for the 2013 Season