Illegal Curve News: A retrospective of the Day it was announced the NHL was returning to Winnipeg

Like many of you I’ve been eagerly awaiting yesterday’s announcement for quite some time.  It would be disingenuous of me to suggest that I’ve been waiting the entire 15 years.  When professional hockey left Manitoba in 1996, it left a lot of Winnipeg fans (myself included) with bitter feelings towards the NHL.

While I continued to watch from afar, I didn’t see another significant (I’ve erased a Ducks/Flames game I saw in 98 at the Honda Center from my memory) live game until  Game 6 of the Stanley Cup Finals in Calgary, which goes down as one of the most exciting games I’ve seen.  Double Overtime and a possible Stanley Cup winning phantom goal aside, the best part were the chants of ‘Go Jets Go’ that were elicited by the Jets gear we wore in Calgary. 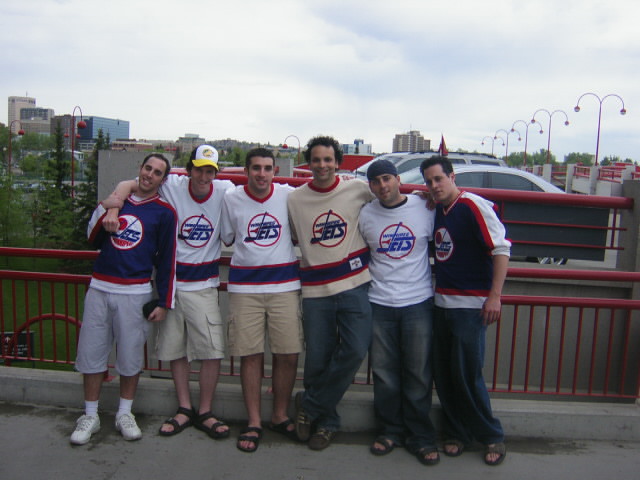 We’ve all spent months/years reading and writing all things ‘Relocation’ so let us fast forward to May 31st, 2011.  A day that will live on in the memories of people in Manitoba for years to come.  Just as we never forgot the day when the Jets left, this day too will be added to the lexicon of Winnipeg NHL lore.

I’d like to say it started like any other Tuesday, but it didn’t.  In fact it began with furious BBM’s from IC contributor Ezra messaging me “Geronimo” which was the IC codeword (in case the Russian signal breakers were reading our BBM chat) for ‘the press conference was a go’.

At that point we launched our Breaking News: NHL hockey returns to Winnipeg and Illegal Curve is your #1 source for hockey news in Winnipeg post.   As with any major announcement, most people remained glued to their television sets at home, or were online at the office or live at the Forks to watch the announcement.  In case you missed it, here is TSN’s recap (video). 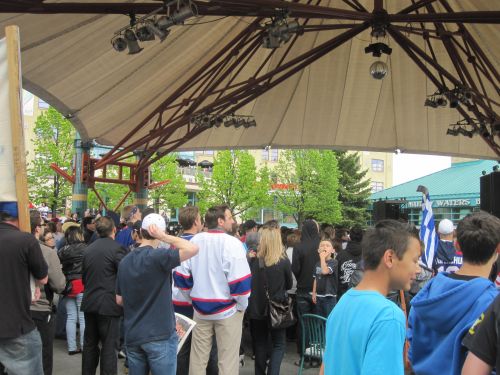 The Radio show crew headed down to Tavern United beside the MTS Centre to prepare for a monumental and marathon day which would see them spend about 8 hours on Sports Radio 1290 with Hustler & Lawless as well as a number of other radio personalities. 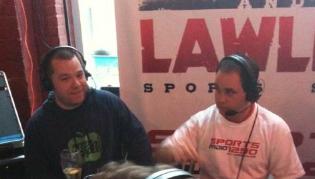 Remis snapped some photo’s of the scene at Portage & Main from his office high above as a street hockey game broke out at Manitoba’s most famous intersection. 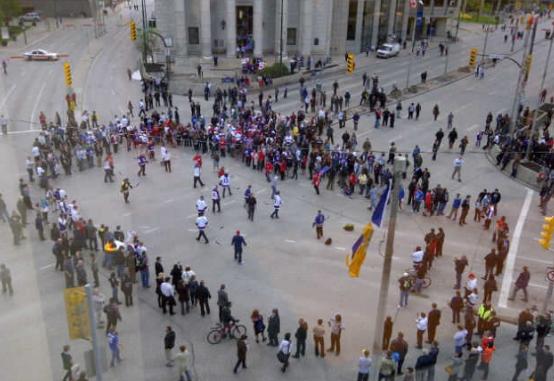 We also headed to the Forks to take in all the action. 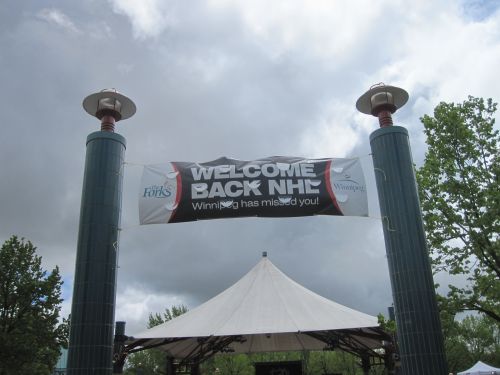 Was able to catch a speech from #25 Thomas Steen which had the crowd revved up. 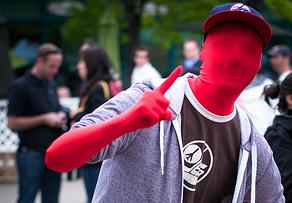 Click read more to see Conservative leader Hugh McFadyen make a Jet appear and the remainder of the days events.

Of course best trick may have gone to Provincial Conservative leader Hugh McFadyen who manged to call in the Jets (literally).


After hanging at the Forks we re-joined the guys at Tavern United to witness part of the day long radio show. 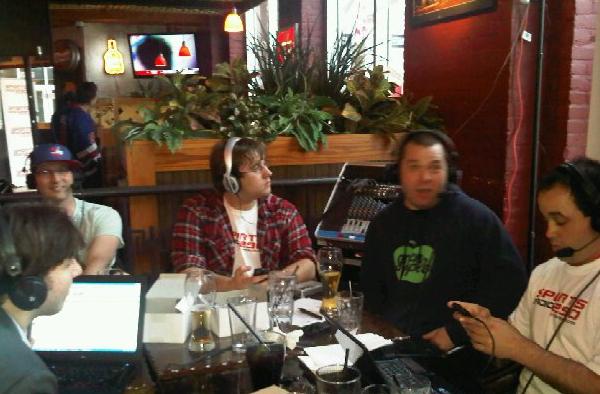 The party at Portage & Main was still on-going by the time we headed for home. 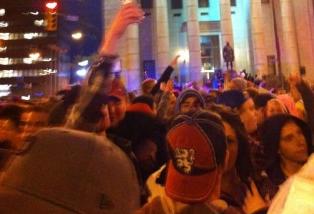 And that in a nutshell is how we spent the day witnessing and participating in the NHL’s return to Winnipeg 15 years after our Jets departed for the desert.

How will you remember one of the best days in recent Winnipeg history, and a day that will long be remembered not just in this province but across North America.  Feel free to let us know how you spent the day in our comments section.