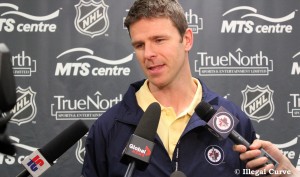 The Illegal Curve Hockey Show airs from noon to 3pm on TSN Radio 1290 in Winnipeg. The following interview is transcribed and paraphrased from the latest episode, available directly at IllegalCurve.com. Alternatively, you can subscribe on iTunes and have the podcast automatically sent to you as soon as it becomes available.

On Saturday’s show St. John’s IceCaps Head Coach phoned in to discuss the IceCaps season thus far, and their first round series victory against the Syracuse Crunch.

On the first round series vs. Syracuse:

“It was exciting for the city obviously, for the players also. This team has been a team that down the stretch we added in some injured guys, added in some guys through trade. We really didn’t get our group together until the last three games of the regular season. It’s a matter of really pushing along the group here, making sure they become as familiar as possible with each other.”

“In the two games in Syracuse, I felt that we were better in the second game than our first, although we didn’t get the results we wanted in the second. As the series went on you really get the sense the group starting to get that identity that you need at this type of year.”

On the play of Derek Meech who scored the series clinching overtime winner:

“After losing Mark Flood early in November, we had a void on the back end. Any time you lose a player like Mark Flood it’s a big hole to fill. Having the addition of Derek Meech back here for the playoff push has been a very huge benefit to this team. (From watching) his poise on the back end, his leadership on the ice and in the room you can tell he’s played in some high pressure games, you can tell that he comes from the National Hockey league environment where he knows what it takes to win at this time of year. His game is one that is growing every single game; he’s been one of our best players and not the best.”

On the play of Patrice Cormier and Spencer Machacek after spending some time in Winnipeg:

“I thought they had a bit more speed after having a chance to play that game in Winnipeg at the NHL level. I thought their process in the game was quicker and their skating was a couple steps quicker than before they left. They have that added benefit coming back where you can sense more confidence in their game, the ability and confidence to make plays in certain areas. Any time those guys get that chance to go to Winnipeg, play in some key situations and just get a couple minutes here and there, they definitely come back with a little more belief and jump in their step.”

On the next opponent the Wilkes-Barre Scranton Penguins

“Wilkes-Barre has good goaltending, they have some big bodied defenseman that defend really well. They play at a fast pace, the games we played during the regular season have all been real strong games between both clubs. It will make for a real good second round.”

“I liked his games; I thought last night he was really good for us. The first game he was strong, as the game wore on he got better and better. I thought last night he made some really good plays. He plays a regular shift with (Marco) Rosa and Carl Klingberg. I like his poise with the puck, I like the awareness he has regarding where his wingers are going to be on the ice. Some definite real good skills out of him, he’s a real good kid, he comes to work every day, he’s professional, he puts in all the extra time on the ice before and after practice and just enjoyed playing.”

On Paul Postma’s play this season and in the first round series:

“At the beginning of the year, the offensive side to Paul’s game was always there, his reads on when to jump in the rush, his ability to get the puck to the net, he possesses a really good shot, that part of his game blossomed even more.

Defensively, he’s been a lot better, when before you might have to make sure in different situations at different parts of the games on the defensive side he’s now out in key minutes of the game when you are defending with a lead. He battles in front of the net, he’s a big man, and he’s gotten stronger. The defensive side which really needed to develop has definitely made some huge strides this year. For a guy who played two of the last three after being off for four weeks with an injury his game has definitely grown here too, it’s gotten stronger and stronger through the first round.”