On Saturday’s Illegal Curve Hockey Show, play-by-play voice of the Dallas Stars, Ralph Strangis came on to give an inside look at the Pacific Division leaders.

The Illegal Curve Hockey Show airs from noon to 3pm on TSN Radio 1290 in Winnipeg. The following interview is transcribed and paraphrased from the latest episode. Subscribe on iTunes and have the podcast automatically sent to you as soon as it becomes available.

On Saturday’s Illegal Curve Hockey Show, play-by-play voice of the Dallas Stars, Ralph Strangis came on to discuss the latest on the Pacific Division leaders. 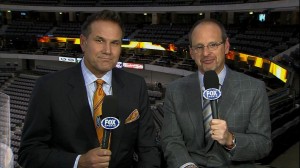 “Glen’s always had good success in the minors, in the AHL, ECHL and sort of the MO of his team was overachieving, doing better than anyone had him pegged for, and making a good late season push for the playoffs. Pretty much every year he’s coached, that’s what happened. He’s been talking about it for a long time; he fully expected this team to go on a run.”

“Jamie Benn’s really good, really really good, I was here with Mike (Modano) for twenty years, I watched him when he was younger, and watched him develop and watched what Hitchock and Gainey did with him. This kid, Jamie Benn (age 22), I’m not going to call him Mike Modano yet, I’ll never call him Miko Modano, but he is as an exciting as an individual talent as we’ve had since Modano. When he decides to do things, he has another gear that everyone on the ice doesn’t seem to have. When he jumps on a puck, and decides to carve his way through four guys, it makes you sit up in your seat and you watch the game differently when Jamie Benn is on the ice. This kid is an emerging rock star in the league.”

“I think Loui benefited greatly by having Jere Lehtinen around for all those years when Loui was just coming into the league. Jere was a Selke trophy winner (3 times), Jere was probably as good of a defensive forward and complete hockey player that we’ve ever had here in Dallas. Loui’s kind of the same guy, you get to watch that. He’s really good on both sides of the puck. Playing with Ribeiro and Ryder, who aren’t the best defensive specialsts in the league, Loui’s the guy who cleans up the messes, is defensively responsible, is never out of position. He doesn’t take penalties (three this season), never commits a foul on the ice, and he’s a guy who can stick 30 goals and lead your team in scoring. He’s a very underrated player.”

“In Boston, he wasn’t the guy, he wasn’t a top six all the time guy. One of the things that appealed to him here was that we don’t have a lot of top six guys. Ryder saw an opportunity here, and liked that somebody was actually courting him. I’ve been really impressed by a couple of things, one is that when we’ve had big games against division rivals, Ryder has been among three or four guys who have always been there, not only just scoring, but competing, and competing hard. If there’s anybody who could have an excuse; he won a Stanley Cup last spring, he’s not on as good of a team, and maybe he’s just there to cash a paycheck, that hasn’t been the case at all. He’s been one of our better players. For the money, he’s probably one of the best free agents signed in the off-season.”

On Mike Ribeiro maturing during his tenure in Dallas:

“If this guy was standing next to you when its 50 out and everyone is in their swim trunks, this is the last guy you would think is a professional athlete. He doesn’t look physically ripped, there’s nothing overwhelmingly powerful about him, and he looks almost emaciated. When he gets out there, especially in tough games, you can’t seem to knock the puck off his stick; he’s stronger than he looks, he scores big goals, he doesn’t seem to have a panic point with the puck. He’s really come along here over the last six years, he’s become a very important guy.”

Ralph Strangis is currently the play-by-play voice of the Dallas Stars and has been with the Minnesota North Stars/Dallas Stars organization since 1990. Paired with Daryl “Razor” Reaugh, the two are known for their witty antics on air and have become fan favorites in Dallas. Their broadcasts of Stars games are simulcast on television (FSN Southwest) and radio (1310 The Ticket).

The Illegal Curve Hockey Show airs Saturday’s on TSN Radio 1290 from noon to 3pm in Winnipeg.