On occasion, Illegal Curve gets e-mails from readers who sound off about the state of the good old hockey game.  We recently got an interesting e-mail from fan Philip Yeth and we thought we would share it with you. Merry Christmas everybody!

The NHL season. Let’s imagine that, over an 80 game schedule, the home team were to win every game, either in overtime or in a shoot-out  Granted this has an extremely tiny probability, but it is possible. Just play along for a moment. At the end of the season, what will the teams’ records be? Every team will have a record of 40-0-40. Pretty impressive, ay? Every one of the teams can say that it’s 40 games over .500. The reality, of course, is that every team would be exactly .500, no matter how we try to improve the optics. But 40-0-40 does look a lot better than 40-40. When my local team, the Jets, were sitting at 16-18-5, in the midst of their fifth or sixth abysmal season in a row, their embarrassingly poor performance was harder to take than the endless days of minus thirty degree temperatures outside. Even so, a stream of their hardy and hopeful advocates spoke of ”winning a couple of games to get back to .500”. In actuality, their won-lost record stood at 16-23. They were in fact, 7 games under .500. Some of their wins were from games involving overtime or shootouts and about the same number of losses were too. 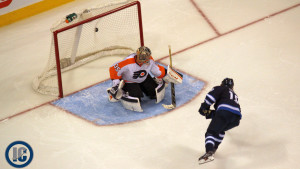 Come on people. We’re not all idiots here. If you’re going to count overtime/shootout wins as wins, then count overtime/shootout losses as losses. Trying to make teams’ records look better is insulting to our intelligence. Not only that. It mocks our earnest attempts at accepting so many underachieving, inconsistent and overpaid players and it mocks our willingness to pay high ticket prices for teams that rarely thrill or entertain, let alone win. This alone, is reason enough to forget about overtime/shootouts. Stop them. Cancel them. Forever. Please.

But it won’t happen. It won’t be stopped. Because there are people at the top of the pile who keep saying that ”fans love the shootouts”. Well, not any fans that I know. Not only have shootouts become a joke in themselves, but shootouts make a farce out of the five-minute overtime periods. Overtime periods should be exciting, but how often are they and for how long? How much of the overtime do you see players simply chipping the puck out, dumping it in and getting off the ice for a change? I mean, come on, guys. Why bother at all?

Why is this the case? Both teams are guaranteed a point, no matter who loses in overtime. Fans won’t really care; they won’t see a loss as a loss. Are players and coaches not really inclined to go all out to try to win, because this would open themselves up equally to losing in a 4 on 4? Do teams think that they’re equally likely or perhaps even more likely to get an extra point in a shootout? Would teams rather take their chances in a shootout, when fans will care even less if they lose? To me, overtime far too often seems like little more than a five-minute exercise in killing the clock. How, tell me, has this enhanced the game for anybody?

And heaven help us if we do get to the shootout. We’ll probably have some hot-dog, or even better, an unlikely lumbering defenceman, skate down the ice, do a joke-spin-around and somehow the puck will end up in the net. I’m personally waiting for the time when a player flips the puck in the air on the way down the ice, catches it on the top of his helmet(a specially designed helmet being worn for the purpose), skates the rest of the way with the puck on the top of his head, and then heads it into the net. Now that would be entertainment! But we’d only see it for a short while, because the deep-thinkers on the rules committee would eventually come up with a rule that made this illegal.

Even to their most vocal proponents, shoot-outs are regarded as not really belonging to the game. The proof of this lies in their resulting suggestion that the overtime be changed, to 3 on 3 instead of 4 on 4. Let’s decide this game, they say!

How ridiculous! Why not go to 2 on 2? Here’s a great idea: the two goalies on one team against the two goalies on the other. All four on the ice in their goalie gear, one goalie in the net and one out, trying to score. Maybe both goalies on a side would go for it, leaving their net empty. Wouldn’t that be fun?

Here’s a better idea. A spitting contest. Hockey players all seem to have a need to spit, non-stop, and this is an area where everyone seems to be quite skillful. (including the Jets players) We could have individuals compete, one-on-one, for distance or for volume or for style. In the last case, a judge could be used to decide. Such judges could be paid by the league and could travel with the officiating crews.

Here’s a still better idea. If the game ends in a tie, it ends in a tie. Both teams get one point. No overtime. We all go home. Or, in the event of a tie, proper five-on-five overtime, with the winner getting 2 points and the loser zilch; one point each if it’s not decided. Or, proper five-on-five overtime until someone scores. Two points to the winner, zero to the loser. These are the only possibilities that should be considered. Any of them is acceptable. But please, nothing else. Unless there’s a way that all of the teams could finish 80-0.