Jets and Oilers alumni rosters are now out. 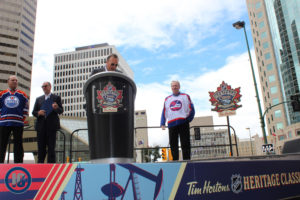 At iconic Portage and Main the Jets and Oilers alumni rosters were revealed by Dale Hawerchuk and Kevin Lowe.

Goalies:  Bob Essensa.  (Perhaps Pokey and the Bandit will be added next).

During his introductory comments Kevin Lowe indicated that he had never been to Portage and Main when it was so warm to which Dale Hawerchuk replied “if he thinks its warm here today it is going to heat up in October”.

Both Hawerchuk and Lowe said that they expect to make a few further additions in the future.  With the Jets needing two goalies perhaps we see a return of Pokey and the Bandit.