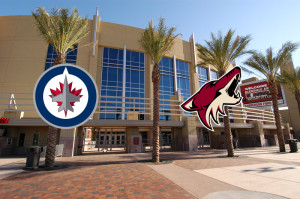 – Arizona is 5-4-1 in their last 10 games. This is the second of three meetings between the two clubs this year.  The Jets defeated the Coyotes 6-2 way back on October 9th.

– Ondrej Pavelec will start in net for the Jets tonight. In 26 games this season, Pavelec has a record of 10-9-5 with a 2.40 Goals Against Average and .911 Save Percentage.

– Jets defenseman Zach Bogosian (lower body) will make his return to the Jets line-up tonight. Bogosian has not played since December 3rd against the Edmonton Oilers. Bogosian will be paired up with Jay Harrison.

– On Thursday defenseman Julien Brouillette cleared waivers and was sent down to the St. John’s IceCaps of the American Hockey League.

– Prior to tonight’s game, Jets Head Coach Paul Maurice announced that defenseman Grant Clitsome underwent back surgery in Los Angeles and is out indefinitely. Clitsome may be out for the season. Clitsome has four assists in 24 games for the Jets this season.

– Jets defensemen Tobias Enstrom and Mark Stuart have been practising with the Jets in non-contact jerseys and are close to making a return to the team.

– Jets forward Evander Kane (lower body) is with the team on the current road trip and practised with the Jets in a non-contact jersey for the second day in a row. Kane is getting close to returning to game action. Kane was originally expected to be out until early February. Kane has not played since December 27th against Minnesota.

– As per Sarah McLellan of the Arizona Republic, Forward Martin Hanzal (upper body) will not play tonight for the second game in a row.

– Defenseman Zbynek Michalek (upper body) will not play for the Coyotes tonight, as per Sarah McLellan.

– Who’s Under the Microscope for Arizona: Shane Doan. The former 1st round pick of the Winnipeg Jets (1995, 7th overall) has had a tough year and he always seems to get a lot of attention when he plays his former team.

– Who’s Under the Microscope for Winnipeg: Zach Bogosian. Bogo returns to the line-up after missing the last 14 games. He’ll be paired up with veteran Jay Harrison.