This is classic, old school hockey in the middle of a cold, prairie winter. 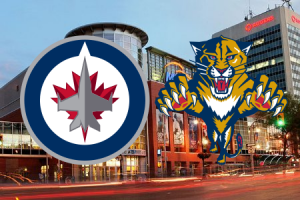 The Story:  This is classic, old school hockey in the middle of a cold, prairie winter.

The Winnipeg Jets host the Florida Panthers tonight at the MTS Centre in a game that will feature two teams battling it out for the last playoff spot in the Eastern Conference.

The Jets have won two of their last three games and can move within a point of the Panthers for the 8th seed in the Eastern Conference with a win. It should be noted that the Jets have played one more game than the Panthers but that hardly diminishes the importance of tonight’s game. With just over a week to go before the 2012 NHL All-Star Break in Ottawa, the Jets have 49 points and are not only within three points of a playoff spot but they are within three points of the Southeast Division lead (the Washington Capitals sit in 3rd place and also have 52 points).

This is all fine and dandy and getting a win tonight against the Panthers will be important (even “four-point” important) but the Jets upcoming road schedule over the next three weeks will be the ultimate test that will determine whether or not the Jets 2.0 will make the playoffs this season.  After tonight’s game, the Jets will play six consecutive games on the road and eight of their next nine games on the road, a gruelling stretch that features no less than three back-to-back games, starting this Monday when the Jets play the Carolina Hurricanes and then face the New York Rangers on Tuesday.

The Jets pessimist might say the Jets can’t win enough of those road games to stay in the playoff hunt while the Jets optimist would say that the team has it in them to get the job done on the road.

Tonight, the Jets main focus will be on the Panthers, who lost 3-1 to the Chicago Blackhawks last night. The Jets and Panthers have met twice this season, with each team winning one game on the road. The last time the Panthers were in Winnipeg was back on November 10th when Kris Versteeg scored a hat trick and the Panthers won 5-2.  Florida has struggled as of late and have only won three of their last 10 games. Versteeg, who leads the Panthers with 39 points, has one point in his last nine games.

According to TSN 1290’s Brian Munz, Evander Kane will not play tonight due to a concussion he suffered on Thursday night versus the Buffalo Sabres.  Zach Bogosian will play tonight after missing the last five games and will replace Mark Flood in the line-up.

Ondrej Pavelec is expected to make his second consecutive start in goal for the Jets.

Who’s Next: After tonight’s game the Jets will play two road games before the NHL All-Star Break in Ottawa (January 28th-29th). The Jets play the Carolina Hurricanes on Monday, January 23rd (6:00 p.m.) followed by a game against the New York Rangers on Tuesday, January 24th (6:00 p.m.).

QUICKIES…..Jets forward Nik Antropov was fined $2,500.00 on Friday for boarding Buffalo Sabres defenseman T.J Brennan during the third period of Thursday night’s game. Antropov was given a roughing penalty on the play……The Jets re-assigned Paul Postma to the St.John’s Ice Caps of the American Hockey League on Friday…..Mark Stuart and Chris Thorburn each have six fighting majors this season, tied for the most on the Jets…..