It’s almost time to party like it’s 2012 but before the champagne pops the Winnipeg Jets will try to close out the magical year of 2011 with a win against the Toronto Maple Leafs. 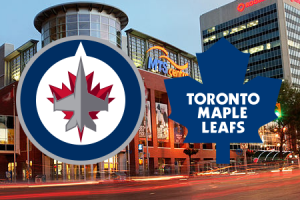 The Story: It’s almost time to party like it’s 2012 but before the champagne pops the Winnipeg Jets will try to close out the magical year of 2011 with a win against the Toronto Maple Leafs.

How do you begin to describe a year like 2011 when it comes to the Jets? Starting with the announcement that the NHL was returning to Winnipeg back in late-May and continuing with the team name announcement at the NHL Entry Draft in Minneapolis in June, it has been one of the most exciting and riveting periods in the history of sports in Manitoba. In the seven months since May, the Jets have done nothing less than put themselves in a position where they are competing on a nightly basis for a playoff spot in the Eastern Conference and considering the hectic schedule the team faced over the summer and fall, that feat is truly remarkable.

With Thursday’s 1-0 overtime win over the Los Angeles Kings, the Jets have improved to 9-3-1 in the month of December and currently sit in 7th place in the Eastern Conference with 41 points tied with the Leafs, Ottawa Senators and the New Jersey Devils.  The Jets have played 12 of their last 14 games at home and have not let many points get away. The Jets have earned points in nine of the last 12 games played at the MTS Centre and have easily put together their best stretch of hockey of the season.

Led by underrated goaltender Ondrej Pavelec (three shutouts), leading scorers Evander Kane and Blake Wheeler, and defensemen Zach Bogosian and Dustin Byfuglien, the Jets have risen to the challenge of overcoming a slow start (the Jets only won five of their first 17 games).

The drive to the Stanley Cup Playoffs continues tonight against the Leafs in what should be an epic game for a myriad of reasons.

Firstly, tonight will be the first time the Maple Leafs will visit the MTS Centre for a regular season game and considering the storied history of the franchise, it is safe to say there will be a few fans cheering for the opposing team.

More importantly, tonight’s game is a classic four-pointer. The Leafs and Jets have identical records and know that losing a point is equivalent to failing to gain one. Add to that fact that the Jets travel to play the Leafs next Thursday in the second game of back-to-back road games (the Jets play Montreal on Wednesday, January 4th) and this has the potential to be one entertaining, and intense, hockey game.

Here are the projected line combinations for the Jets for tonight’s game against the Leafs.

Jim Slater will be a game-time decision and the lines may change if he’s ready to go.

Ondrej Pavelec will get the start in goal.

Who’s Next: The Jets will have three days off after tonight’s game before they start 2012 with a four-game road trip that begins on Wednesday, January 4th against the Montreal Canadiens (6:30 p.m. CST)

QUICKIES…..Evander Kane has three goals in his last two games. Kane’s next goal will tie his career-best set last year in Atlanta (19)……The Jets have nine road games in the month of January versus four home games…..The Jets have scored 40 first period goals, second most in the NHL. The Philadelphia Flyers have scored 41 first period goals…..Ondrej Pavelec’s save percentage in his last six starts is .954……Blake Wheeler has six points (two goals, four assists) in his last four games…..Kane is only two points away from 100 points in his career…..Chris Mason‘s shutout on Thursday night versus the Los Angeles Kings was his 22nd career shutout…..