If the Winnipeg Jets are serious about making the Stanley Cup Playoff this year, they will have a great chance to prove it over the next week as they will play the surprising Toronto Maple Leafs twice, starting tonight at the MTS Centre. 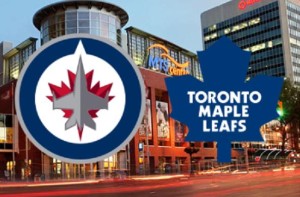 The Story: If the Winnipeg Jets are serious about making the Stanley Cup Playoff this year, they will have a great chance to prove it over the next week as they will play the surprising Toronto Maple Leafs twice, starting tonight at the MTS Centre.

Toronto hasn’t made the playoffs since 2003’04 (lost to the Philadelphia Flyers in the second round) but they are currently in 5th place in the Eastern Conference, five points ahead of Winnipeg. Thanks to improved goaltending from James Reimer and Ben Scrivens and the recent offensive explosion of 22-year-old forward Nazem Kadri (6 goals, 1 assist in his last five games) the Leafs are sticking around in the thick of playoff race at the midway point of this abbreviated 2013 season.

The Leafs don’t have the deepest roster in the National Hockey League but they have adopted a workmanlike approach under Head Coach Randy Carlyle, now in his first full season as bench boss. Carlyle, along with assistants Scott Gordon and Greg Cronin, have the Leafs playing an extremely aggressive style of hockey and it has been working. Yes, Winnipeggers Colton Orr and Frazer McLaren have brought some good old fashioned toughness to Toronto but the Leafs line-up is full of role players, whether it is Jay McLement, Clarke Macarthur and Leo Khomarov  on forward or Mark Fraser and Michael Kostka on defense.

For the Jets, the only thing that matters tonight is earning a clean two points at home. The Jets have won only four games so far this year at home, simply not acceptable for a team that prides itself on its fans and sold out building. The Jets are also seeking revenge for an early February loss to the Leafs, a game which saw Phil Kessel score his first goal of the season.

On the injury front, the Leafs are relatively healthy as compared to a lot of other teams in the NHL. Joffrey Lupul did not travel to Winnipeg but he has been practising and is nearing a return to game action. Lupul has not played since January 23rd when he suffered a broken forearm.

The only line-up change for the Jets tonight will be Chris Thorburn checking back in for Alexander Burmistrov, who will be a healthy scratch.

This is the second of three meetings between the Leafs and Jets this year. The Leafs defeated the Jets 3-2 back on February 7th. The Jets and Leafs play this Saturday on CBC’s Hockey Night in Canada (6 p.m. CST).

Ondrej Pavelec is expected to get the start in goal for the Winnipeg Jets.

QUICKIE…..The Winnipeg Jets announced on Monday that the St. John’s IceCaps have acquired defenceman Patrick Cullity from the Springfield Falcons for future considerations.