The Bolts bring the disarming 1-3-1 defence to Winnipeg. This is the first time a Bolts team has visited Winnipeg (during regular season) since the Jets won 5-2 on October 17th,1995. 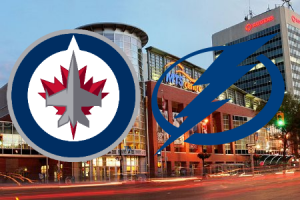 The Story: The Winnipeg Jets have lost five games in a row entering tonight’s home game and even though it’s only mid-November, the weaknesses and deficiencies on this hockey club are becoming increasingly difficult to ignore.

During Saturday night’s 2-1 loss to the cellar-dwelling Columbus Blue Jackets, the Jets didn’t do much of anything right, except maybe put on their white jerseys and show up to play and even that is debatable. Yes, the Jets outshot the Blue Jackets 36-27 but many of those shots came in the third period (14) when the Jets were trailing by two and were essentially out of the game. The Jets are still having trouble creating offense off the rush and are continuing to get many of their shots from the outside, not resulting in quality scoring chances.

It was not all doom-and-gloom for the Jets Saturday as goaltender Ondrej Pavelec was steady in net in his ninth consecutive start but it was the second consecutive stinker after a 5-2 loss to the Florida Panthers last Thursday and not a good effort for a team that is falling further and further out of the playoff picture with every loss.

Perhaps sensing a lack of energy and consistent scoring pressure in Saturday’s game, the Jets recalled 30-year-old winger Jason Jaffray from the St. John’s IceCaps of the American Hockey League in attempt to provide a spark to a team that has scored three goals in its last two games. Jaffray is expected to play for the Jets tonight. The Jets also recalled young defenseman Arturs Kulda from St.John’s and assigned Paul Postma to St.John’s. Postma played three games for the Jets but was re-assigned because of a death in the family that will keep him away from the game for several days.

The Lightning come to Winnipeg for the first of three meetings this season and currently sit in third place in the Southeast Division with eighteen points, three points behind the 1st place Washington Capitals. The Lightning were defeated 3-0 by the St.Louis Blues Saturday night which snapped a three-game winning streak.

The Lightning made headlines around the hockey world this week for their game against the Philadelphia Flyers on Wednesday night which included what is now being referred to as the “Philly Freeze”. At the beginning of the game, Kimmo Timonen of the Philadelphia Flyers had the puck in his own zone and simply refused to advance the puck, a deliberate ploy to counter and expose Lightning head coach Guy Boucher‘s 1-3-1 defensive system. The Flyers stalled the play by not moving the puck or advancing the play twice in the first five minutes and over half a dozen times in the game.

Although the 1-3-1 system and the “hold-the-puck” stall strategy are not illegal under the NHL’s Rule Book, both strategies are expected to be on the docket when the NHL’s general managers meet in Toronto Tuesday.

Jets expected line up (as seen in practice)

According to TSN’s Brian Munz

Goaltender Dwayne Roloson looks to extend his personal winning streak to four games for the Lightning.

NOTES… The Jets announced Sunday that Winnipeg-born defenceman Derek Meech has undergone surgery for a suspected knee injury. Meech will miss the next six to eight weeks…..The Tampa Bay Lightning are 5-1-0 at home but are 3-5-2 on the road so far this year…. The Lightning have been outscored 19-7 in the first period this year…..The first annual Winnipeg Jets Skills Competition presented by The Home Depot takes place on Tuesday, November 15th at the MTS Centre, beginning at 7:00 p.m. Tickets are available now at Ticketmaster (www.ticketmaster.ca)…..