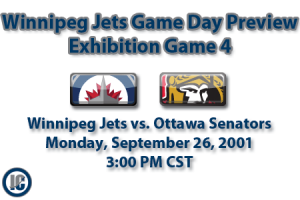 Where: Mile One Centre in St.John’s, Newfoundland

The Story: The Winnipeg Jets are looking to rebound from a pair of weekend losses today in St.John’s, Newfoundland against the Ottawa Senators after they lost their second exhibition in a row Sunday afternoon, 4-0 to the Carolina Hurricanes.  The Jets iced a roster that didn’t include the majority of their best forwards on Sunday, including Andrew Ladd, Bryan Little, Blake Wheeler and Evander Kane.  Number-1 goaltender Ondrej Pavelec and top defenseman Tobias Enstrom also did not play in the game.  This afternoon, the Jets are sending their A-squad to St.John’s to play in what is being called the Kraft Hockeyville game (Conception Bay South was chosen among a list of Canadian cities for the Kraft Hockeyville title, which will be televised on CBC).  Today’s game is the third in as many days for the Jets who will return to Winnipeg for two home exhibition games on Wednesday, September 28th versus the Carolina Hurricanes and Friday, September 30th against the Nashville Predators (Both games will be broadcast on TSN Jets and Sports Radio 1290).

The Jets will have 30 players with them in St.John’s but only 22 players will dress against the Ottawa Senators today.  For many players, this may be their final game for the Jets for awhile, as the team still has to cut their roster by 30 players before training camp ends next week.  Players such as Mark Flood, Michael Forney, Zach Redmond, Cody Sol, Akim Aliu and Ben Chiarot, among others, are not expected to make the Jets opening day roster, which means this will most likely be the last exhibition game for some of them today.