The Winnipeg Jets will look to snap a three-game winless streak on the road tonight against the red-hot Ottawa Senators in a crucial mid-January match-up. 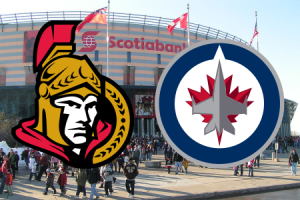 The Story: The Winnipeg Jets will look to snap a three-game winless streak on the road tonight against the red-hot Ottawa Senators in a crucial mid-January match-up.

The Jets dropped their third game in a row Saturday afternoon, 2-1 to the New Jersey Devils at home, and now find themselves five points behind the Pittsburgh Penguins for the 8th and final playoff spot in the Eastern Conference. Winnipeg has lost five of their last six games and have gone from sixth place in the East to 10th place in just over two weeks.

Perhaps the most disheartening aspect of the Jets current three game losing streak is the way in which they have played in the all-important third period. The Jets have been outscored 12-1 in the third period in their last six games and in two of those games (against the Boston Bruins and Devils) the Jets held leads going into the third period but ultimately came up short. Jets head coach Claude Noel himself said he was generally happy with the way the Jets played Saturday afternoon and thought it was a full 60-minute effort however the Jets failed to hold onto a lead against the Devils and failed to score more than two goals for the 23rd time this season.

Anything but a full 60-minute effort won’t be enough for the Jets tonight either because the 5th place Ottawa Senators are a very good hockey team who are winners of their last four games (8-1-1 in their last 10 games). Senators Captain Jason Spezza is playing a key role in the Sens offensive attack this season and leads his team with 47 points in 46 games. The last two seasons have been trying for Spezza as he has averaged 57 points (well below his career average) and been the subject of countless trade rumours. This year Spezza is back to his regular form and is thriving on a young and improving Senators team that is currently ranked 6th in the NHL in goals scored (3.06 goals/game).

The Jets may not have Blake Wheeler in the line-up against the Ottawa Senators. Wheeler took a puck off the throat on Saturday afternoon against the Devils. Wheeler did not travel with the team to Ottawa Sunday afternoon. According to the Winnipeg Free Press, the Jets have not decided if Wheeler will be travelling to Ottawa for Monday night’s game.

It has not yet been announced who will start in goal for the Jets tonight, but it’s safe to say that Tuesday’s starting goalie will probably be different than whoever gets the start tonight.