The Jets didn’t have long to savour the victory over the Hurricanes as they had to fly to Michigan and take on the Detroit Red Wings. 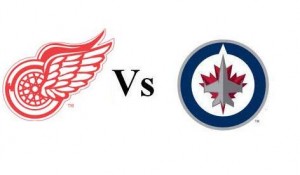 The Story: If you’re the Winnipeg Jets, how do you celebrate winning four games in a row at home? You head on the road immediately to play one of the hottest teams (8-2-0 in last 10 and 11-2-1 at home) in the NHL of course. The Winnipeg Jets defeated the Carolina Hurricanes 4-2 Friday night at the MTS Centre but they had to celebrate it quickly as they had to board a plane almost immediately to Detroit for their game against the Red Wings (6:00 p.m. CST, CBC’s Hockey Night in Canada).

After losing to the Ottawa Senators last Tuesday, the Jets have defeated the Phoenix Coyotes, New Jersey Devils, Boston Bruins and Carolina Hurricanes in consecutive games and now sit in 9th spot in the Eastern Conference with 30 points (13-11-4).

The Red Wings defeated the Phoenix Coyotes 5-2 in Detroit on Thursday night and have had a few days off to rest up for the Jets.  This was good news for the team as Pavel Datsyuk was able to recover from an undisclosed injury.  The line of Jiri Hudler, Valteri Filppula and Henrik Zetterberg has been dominant for the Wings and coach Mike Babcock will look to them to continue their strong play.  The Wings have owned the Joe Louis Arena this year, going a scorching 11-2-1 at the venerable arena.  Perhaps it is the abundance of Little Caesars in the building or the passionate fans but this is one great (and intimidating) building to play in. 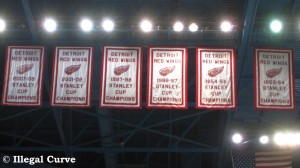 Who’s Next: After tonight’s game The Jets return home to commence a six-game homestand beginning on Tuesday, December 13th versus the Minnesota Wild.

NOTES…..Johan Franzen has 4 goals and 6 assists in his past 10 games, while Henrik Zetterberg has 2 goals and 8 assists in his last 10. …  The Jets team leaders in shots are Evander Kane and Dustin Byfuglien tied for team lead with 109 each…. It is home sweet home for Evander Kane as he has 5 goals and 2 assists in in his last 5 games at the MTS Centre, while linemates Blake Wheeler (1 goal, 5 assists) and Bryan Little (3 goals, 4 assists) all performed really well leading the Jets to a 4 and 1 home record during the homestand.