While the Muppets once took Manhattan, this time around it will be the IC crew and the Jets who are invading downtown New York City. 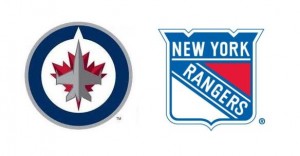 Game Previews:  No word yet if the Illegal Curve crew will be running in today’s New York Marathon with Mark Messier as they themselves conclude a marathon of hockey games.  They have seen 3 games in the last 4 nights ending with a Sunday night contest against the Rangers in the venerable Madison Square Gardens arena.

Both the Rangers and the Jets played last night.

The Rangers took care of the Montreal Canadiens at home.  The Blueshirts had the benefit of the majority of power plays although they only cashed in once in nine opportunities.  The scoring continues to be spread out on this team.

Can the Jets even the season series at 1 after they dropped the first game, an October 24th home game to the Rangers at the end of the Rangers long Western Canada road trip.

Notes….The last time a team from Winnipeg played an NHL game in Madison Square Garden was October 11th, 1995 a game that saw the Rangers beat the Jets 6-4.