Start spreading the news because the Jets are in New York tonight to face the Rangers in the last game before the All-Star break. 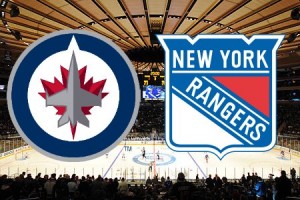 The Story:  Start spreading the news because the Jets are in New York tonight to face the Rangers in the last game before the All-Star break..

The Jets lost 2-1 to the Carolina Hurricanes last night but they will try to follow it up with a win in the Big Apple Tuesday night against the best team in the Eastern Conference.

The Jets outshot the Hurricanes 30-16 last night but again failed to score more than a goal for the fifth time in their last 11 games. Kyle Wellwood got the lone Jets goal as the Jets continued to struggle on the road. Winnipeg is now 7-13-4 on the road, remarkable for a team that is in 10th place and just three points behind the Washington Capitals for the last playoff spot in the East.

With only one game remaining before the upcoming NHL All-Star Break in Ottawa (January 28th-29th), the Jets are desperate for at least a point tonight in New York. The Jets have had a horrible month of January (3-7-1) and need to keep pace with both the Capitals and the 9th place Toronto Maple Leafs, who defeated the New York Islanders 3-0 last night.

Ondrej Pavelec will start in goal for the Jets tonight.

Who’s Next: After tonight’s game, the Jets have six days off before their next regular season game as they will now break for the 2012 NHL All-Star Weekend in Ottawa, which starts this Saturday, January 28th with the the NHL Skills Competition and Rookie Game and ends with the NHL All-Star Game on Sunday, January 29th. The Jets next game is on Tuesday, January 31st against the Philadelphia Flyers (6:00 p.m. CST)

QUICKIES…..Andrew Ladd, Kyle Wellwood and Tanner Glass are the only three Jets who have played in all 49 games this season……Kyle Wellwood is on a five-game points streak…..Join Illegal Curve at The Cheer Bar & Grill (Osborne & Stradbrook) for tonight’s Jets/Rangers game…..Pick up your official Illegal Curve New Era 5950 Fitted Hat, available online (www.illegalcurve.com ) or at City Haul on 823 Corydon Avenue…..