Well, after Thursday night’s miraculous 3-2 shootout win over the Washington Capitals, the Winnipeg Jets will try to remain in the Eastern Conference playoff race and make it three wins in a row this afternoon when they play the Pittsburgh Penguins. 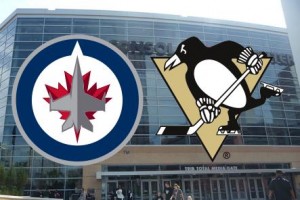 The Story:  So where do we go from here?

Well, after Thursday night’s miraculous 3-2 shootout win over the Washington Capitals, the Winnipeg Jets will try to remain in the Eastern Conference playoff race and make it three wins in a row this afternoon when they play the Pittsburgh Penguins.

The Jets have been written off time and time again this season but with 27 games remaining in the season, the Jets are three points behind the Capitals for the Southeast Division lead and four points behind the Toronto Maple Leafs for the 8th and final playoff spot in the East.

The Jets are in 10th place in the East with 58 points and if they can manage to win today, they can position themselves very well heading into the final two months of the season. The Jets have 16 games remaining at home where they have been excellent (16-8-2) and when you consider the Jets next game is against the lowly New York Islanders, the Jets have the opportunity to put together an extended winning streak and make a late-season surge into the chase for Lord Stanley’s Cup.

Today’s meeting will be the third of four meetings between the Pens and Jets this season. The Jets defeated the Penguins for their first win of the season back in mid-October but the Penguins won the most recent contest, 4-1 in Winnipeg on December 23rd.

The Pittsburgh Penguins will get a major boost today in the form of center Jordan Staal, who will make his return to the line-up for the first time since he injured his knee back on January 6th against the New York Rangers.

Jets forwards Kyle Wellwood and Tim Stapleton practiced with the team on Friday and will play today versus the Penguins. Jets forward Aaron Gagnon will be scratched and is expected to be re-assigned to St. John’s of the American Hockey League.

Jets defenseman Zach Bogosian did not practice with the team Friday and is questionable for Saturday’s game. If Bogosian cannot play, the Jets will start Randy Jones in his place.

Ondrej Pavelec will start in net for the Jets this afternoon.

QUICKIES…… Mike Colligan, who is the Pittsburgh Penguins correspondent for Thehockeywriters.com and NHL Analyst for Forbes.com Sports Money will be a guest on The Illegal Curve Hockey Show this Saturday morning (7 a.m.- 10 a.m. CST) on TSN 1290 Radio…..Pick up your official Illegal Curve New Era 5950 Fitted Hat, available online or at City Haul on 823 Corydon Avenue…..