The suddenly hot Winnipeg Jets, fresh off an overtime win over the Tampa Bay Lightning, play the Southeast Division-leading Florida Panthers tonight, looking to close the points gap even more in the Eastern Conference Playoff race. 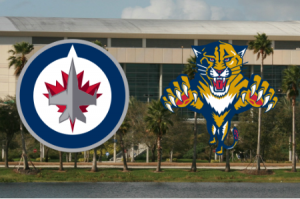 The Story:  The suddenly hot Winnipeg Jets, fresh off an overtime win over the Tampa Bay Lightning, play the Southeast Division-leading Florida Panthers tonight, looking to close the points gap even more in the Eastern Conference Playoff race.

The Jets defeated the Lightning 2-1 in overtime last night thanks to Kyle Wellwood’s 10th goal of the season and now have 54 points in 52 games, three less points than the Panthers, who have played three less games. Winnipeg is in 10th place in  the East, two points behind the 9th place Washington Capitals (who have two games in hand) and four points behind the 8th place Toronto Maple Leafs (who have one game in hand).

The last two games have been quite revealing for the Jets who have struggled all year with consistency, especially on the road. The consecutive wins over Philadelphia and Tampa mean the Jets record on the road has improved to 9-14-4, still poor, but better than it was at the beginning of the week.

Perhaps more important than the fact that both wins have been on the road is the fashion in which the Jets have won the last two games.  The Jets came from behind to defeat Philadelphia on Tuesday night then the Jets were able to defeat the Lightning in overtime on Thursday despite giving up a late third period goal in a close, low-scoring game.  The Jets have shown tremendous character and resiliency in the first two games of this current four game road trip and the payoff has been two well-deserved wins.

The Jets and Panthers have met three times this year, with Florida taking two games and the Jets taking one. The Panthers defeated the Jets 4-3 in a shootout 13 days ago, back on January 21st, which was a particularly difficult loss for the Jets, who erased two Florida leads in the game.

The Jets line-up is expected to remain unchanged from last night.

Who’s Next: The Jets end their current road trip on Sunday, February 5th with a game against the Montreal Canadiens (1 p.m. CST).