The Jets are looking to overcome their 0-5 record in the 2nd game of a back-to-back when they take on the Leafs tonight. 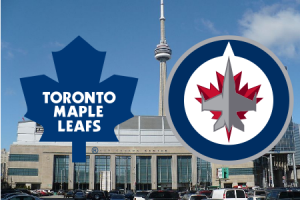 The Story: The Winnipeg Jets will look to rebound from a humiliating 7-3 loss to the Montreal Canadiens when they visit the Toronto Maple Leafs tonight in the second of back-to-back road games.

The Jets gave up three goals in 50 seconds in the third period on Wednesday night against the Canadiens and continued to struggle away from home as their away record fell to 5-9-4 with the loss. If there was a silver lining for the Jets, it was that they literally didn’t have time to dwell on the loss as they were forced to immediately set their sights on the Leafs.

The Jets played the Leafs just five nights ago, back on New Year’s Eve, a 3-2 win that capped off a terrific month of December for the team. The Jets finished last month 10-3-1 and got as high as sixth place in the Eastern Conference standings. With the loss to Montreal, Winnipeg currently sits in 9th place with 43 points, one point behind the New Jersey Devils for the 8th and final playoff spot and tied with the Maple Leafs who have the same amount of points.

Tonight, the Jets are focused solely on the short-term however as they will try to avoid two straight losses for the first time since November 26-29 when the Jets lost two games in a row to the Boston Bruins and Ottawa Senators respectively.

There is one certainty for the Jets tonight. If the the Jets turn the puck over with regularity like they did against the Canadiens, they will not find themselves back in the win column. Giveaways by Kyle Wellwood in the first period and Ron Hainsey in the third period led directly to Montreal goals and the Jets defensive zone coverage was generally weak all game.

Jets centre Bryan Little, who has missed the last seven games with a foot injury, is available for tonight’s game but he is expected to be a game-time decision for the Jets.

It is not yet known who will start in goal for the Jets tonight, but based on the fact Ondrej Pavelec started last night’s game against the Canadiens, we are betting on Chris Mason tonight.

QUICKIES…..Blake Wheeler had two points (goal, assist) on Wednesday night against the Canadiens and is now tied with Evander Kane for the team points lead with 30 points. Wheeler has the best plus/minus rating on the Jets at Plus-9…… Chris Thorburn has the worst plus/minus rating on the Jets at Minus-10…..Join The Illegal Curve Crew at The Cheer Bar & Grill (corner of Osborne and Stradbrook) for tonight’s game…..