The Jets, winners of a wild one in Philly, take the road show to Florida to take on a southeast division rival. 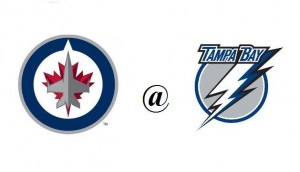 The Story: So, what’s the best way for the Winnipeg Jets to move on after a 9-8 road win in Philadelphia against the Flyers in which offense dominated and defense and goaltending were basically non-existent? If your answer was play the offensive juggernaut Tampa Bay Lightning than you have the correct answer. Sarcasm aside, the Jets continue their seven game road trip tonight in Tampa and will look to return to some semblance of normalcy and consistency.

On Thursday night, The Jets held leads of 5-1 and 6-2 against the Flyers but watched them disappear as they had complete breakdowns on defense which let Philly back in the game. Coach Claude Noel certainly likes a high-tempo style but he could not have liked what he saw in the second and third periods of that game from a defensive standpoint. The win was really all that mattered.

The Lightning (4-4-1) have been lukewarm to start the 2011’12 season and are coming off a 5-3 loss to the Nashville Predators Thursday night in which Mathieu Garon was pulled from the game and replaced in favour of Dwayne Roloson. The Lightning have gotten production from their big three, Steven Stamkos, Martin St.Louis and Vincent Lecavalier, but the Lightning have also given up 35 goals in 9 games, something that can’t be sitting well with sophomore Bolts coach Guy Boucher.

It would be logical to expect a quieter, more defensive game tonight but it is probably not going to happen. The Jets displayed a run-and-gun attack on Thursday night and that might very well be the case in Tampa tonight too. The Jets will have to be careful however as the “Shoot out at the OK Corral” system is not the way this team is going to make the Eastern Conference playoffs but coming off of Thursday’s win, the Jets showed us that they are not afraid to play that type of game.

Even though it was great to see the Jets erupt offensively Thursday night, they will need to play better defensively. Zach Bogosian did not have his strongest game and was Minus-3 (everyone in the game was a plus except for five players) and Dustin Byfuglien was also exposed and caught out of position several times. The Jets have a tendency to go for the home-run pass or the cross ice two-liner and it is starting to become a systematic problem. The Jets need to simplify and stop running around in their own zone.

Notes…. Jets goaltender Chris Mason injured his groin against the Philadelphia Flyers Thursday night and may not dress tonight….. The Jets have recalled Peter Mannino from the St.John’s IceCaps of the American Hockey League to be an emergency back-up if Mason can’t dress. Mannino is 2-2 with one shutout for the Ice Caps this year….. Jets defenseman Derek Meech has been placed on injured reserve……Dwayne Roloson hasn’t started since October 17th. Roloson has a 1-2-1 record, 4.54 goals-against average and .869 save percentage. His GAA entering Saturday’s game is second last in the entire NHL….