The Winnipeg Jets will look to play the role of streak busters tonight when they visit the Tampa Bay Lightning, winners of five games in a row. 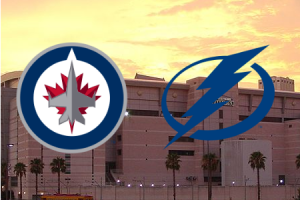 The Story:  The Winnipeg Jets will look to play the role of streak busters tonight when they visit the Tampa Bay Lightning, winners of five games in a row.

The Jets are coming off a huge 2-1 shootout victory over the Philadelphia Flyers on Tuesday night and spirits are high so it only makes sense that they will want to spoil the Lightning’s good mood tonight in the Sunshine State.

The Jets and Lightning have met twice already this year, with each team earning a clean (no shootout/overtime) victory. The two teams are currently separated by four points in the ultra-close Southeast Division standings (Jets have 52 points, Lightning have 48 points) and will play each other four more times this season, including tonight’s game.

The stark reality is the Jets and Lightning will have to go through each other if they want to be participants in the Stanley Cup Playoffs this year. Considering that it is quite possible that only one team from the Southeast Division will make the playoffs, (The Florida Panthers are the only team currently in a playoff position with 57 points), it won’t be easy for either the Jets or the Lightning down the stretch.

Tonight is the first game of back-to-back games for the Jets, who play the Panthers tomorrow night.

The Jets will get a big boost tonight in the form of Dustin Byfuglien and Alexander Burmistrov, who will both return to the line-up tonight. Byfuglien has missed the last 16 games with a knee injury and will be a welcome addition to the Jets power play, which has struggled without “Big Buff” and his big shot on the point.

The starting goaltender for tonight’s game has not been confirmed but Ondrej Pavelec and Chris Mason may split the two back-to-back games against the Lightning and Panthers.

QUICKIES…..Chris Thorburn’s game-tying goal on Tuesday night against Philadelphia was his first goal of the season (predicted by @icdave on twitter moments before he scored) and first goal since March 29,2011 when he was a member of the Atlanta Thrashers….. Join Illegal Curve at The Cheer Bar & Grill (Osborne & Stradbrook) for tonight’s Jets/Lightning game…..Pick up your official Illegal Curve New Era 5950 Fitted Hat, available online or at City Haul on 823 Corydon Avenue…..