Not only do the Jets get their first taste of The Empire State, but 3 members of the Illegal Curve crew (Drew, Rich and Ez) are also going to be in attendance. 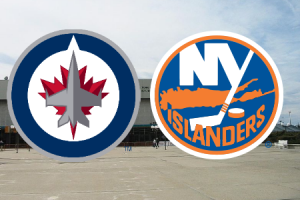 The Story:  Bigger than the Jets first trip to New York State, where they will be facing all four New York based teams, is the fact that host of the Illegal Curve Radio show Drew Mindell will be heading down to watch 3 of the 4 games (Islanders, Devils and Rangers) with fellow Illegal Curve radio crew members Richard Pollock and Ezra Ginsburg for his stag festivities.  They along with 10-15 Winnipeggers will be in attendance to watch the Jets take their first steps in The Empire State.

After blowing a lead, the Jets won their last game in memorable fashion.  Evander Kane scored with 49.9 seconds to go in the 3rd period on a controversial goal which was initially waived off.  Captain Andrew Ladd and Kyle Wellwood scored in the shootout to give the Jets the win.

The Islanders, who started the season roaring out of the gate, have crashed back to earth going 0-3-2 in their last 5 games.  The team has been off since an OT loss to the Sharks last Saturday night.

Tonight’s Projected Lines (according to Brian Munz of TSN Radio 1290):

Notes….The last time a team from Winnipeg played an NHL game on Long Island was March 3rd, 1996, a game that saw the Jets beat the Islanders 7-5.