It’s time for the Winnipeg Jets to go back to back-to-back. 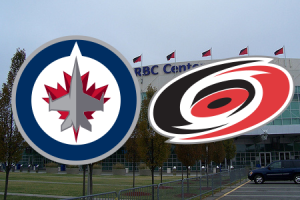 The Story:  It’s time for the Winnipeg Jets to go back to back-to-back.

The Jets have two road games coming up starting tonight against the Carolina Hurricanes followed by a game tomorrow night versus the New York Rangers which will be the Jets last two games before this weekend’s 2012 NHL All-Star Weekend in Ottawa, Ontario (Saturday, January 28th-Sunday, January 29th).

The Jets lost 4-3 in a shootout to the Florida Panthers on Saturday night but picked up a very important point to stay within striking distance of the Washington Capitals for the 8th and final playoff spot in the Eastern Conference. The Jets currently sit at 50 points and are three points behind Washington and four points behind the Panthers for the Southeast Division lead.

The Jets dominated the Panthers on Saturday night, outshooting them 44-23 (including 10-3 in the third period) but the Jets lacked finish around the net. The Jets also only converted on one of five power play chances, including a missed opportunity to score on a 5-on-3 in the first period.

The Jets best line on Saturday night was the line of Andrew Ladd-Nikolai Antropov-Kyle Wellwood who combined for five points and the first two goals of the game. Saturday also marked the return of defenseman Zach Bogosian, who missed the previous five games with a lower-body injury. Bogosian lead the Jets in ice time (25:19) and was solid in his own zone.

The Jets and Hurricanes have met three times this season with the Jets winning all three games.  It is interesting to note that Chris Mason has been in goal for the Jets for all three of those games. Mason will start for the Jets tonight versus the Hurricanes. Ondrej Pavelec is expected to start against the New York Rangers tomorrow night.

QUICKIES…..Patrice Cormier played only three minutes and 55 seconds on Saturday against the Panthers…..Kris Versteeg a.k.a. The Jets Killer has five goals in three games against the Jets this season……Join Illegal Curve at The Cheer Bar & Grill (Osborne & Stradbrook) for tonight’s game…..