The Winnipeg Jets will be looking to make it four road wins in a row this afternoon when they visit the Philadelphia Flyers at Wells Fargo Center. 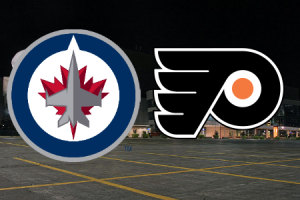 The Story: The Winnipeg Jets will be looking to make it four road wins in a row this afternoon when they visit the Philadelphia Flyers at Wells Fargo Center.

The high-flying Jets are currently undefeated on their five-game road swing as they defeated the Carolina Hurricanes 4-3 on Thursday night which was preceded by a 2-1 victory over the Buffalo Sabers on Tuesday night. Before their most recent home stand (3 losses to Philadelphia, Pittsburgh and Boston) the Jets defeated the Ottawa Senators 1-0 on the road on Saturday, February 9th.

The key for the Winnipeg Jets so far on this road trip has been the production of the Andrew Ladd-Bryan Little-Blake Wheeler line as well as the stellar play of goaltender Ondrej Pavelec. Ladd, Little and Wheeler have combined for 8 points in the last two games; 6 points (3 goals, 3 asissts) against the Hurricanes and 2 points (2 goals) against the Sabres. Pavelec, on the other hand, has earned two straight victories, stopping 56 of 60 shots and catching fire at just the right time.

The Flyers head into tonight’s contest having played the most games in the entire National Hockey League (19). Philadelphia dropped a 5-2 contest to the Florida Panthers on Thursday night and are currently fighting to prove themselves as legitimate players in the Eastern Conference Playoff race. The Flyers defeated the Pittsburgh Penguins 6-5 on Wednesday night but they continue to have trouble with consistency and currently find themselves in 4th place in the Atlantic Division and one point out of a playoff spot.

Winnipeg Jets defenceman Zach Redmond continues to recover in hospital from an injury he suffered during a practice in Carolina on Thursday. Redmond suffered a lacerated femoral artery after his teammate cut him during a one-on-one practise drill. Redmond lost a significant amount of blood on Thursday but the Jets medical staff, led by head athletic therapist Rob Milette, managed to contain the wound. The Jets re-called Defenceman Julian Melchiori from the St. John’s IceCaps of the American Hockey League to replaced Redmond as a spare 7th defenceman on the Jets current road trip.

Today’s game is the second of three meetings between the Jets and Flyers this year. The Flyers defeated the Jets 3-2 less than two weeks ago on February 12 in Winnipeg. The third and final meeting of the season between the two teams will be in Winnipeg on Saturday April 6th at 2:00 p.m. (CBC).

Ilya Bryzgalov is expected to start in goal for the Flyers tonight.

Projected Jets line combinations (subject to change* before game time):
*as of Jets skate this morning